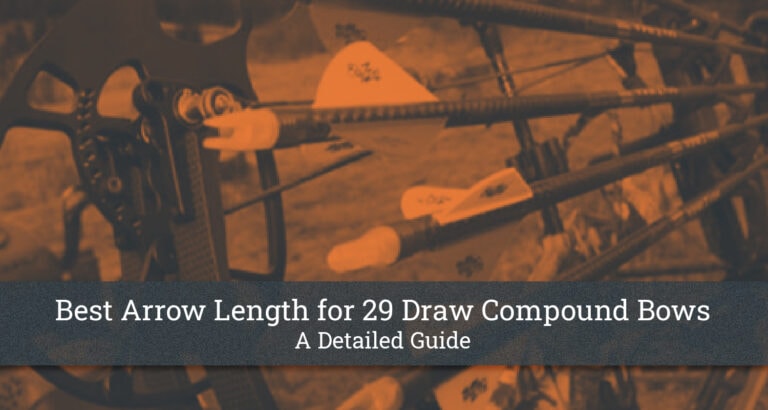 Compound bows with a 29-inch draw length fit many archers and have become very popular nowadays. Its popularity also increases the need for finding the best arrow length for a 29” draw.

In this guide, while we actually can’t answer this question as everyone has their own suitable preferences, we can help by giving you the most common choices.

We’ll also show you how to choose the proper length by using common formulas. There are safety guidelines related that you must remember if you want to be ready for hunting day.

The Most Common Arrow Length for a 29” Draw

There are many factors that define arrow length: the bow’s draw length, bow type, and position of the arrow rest.

In the past, it was believed that the length was equal to or could even surpass the draw length. But with modern centershot cutaway compound bows, the length can be decreased. The reduction improves the power, accuracy, and consistency of the shots.

That’s why the proper arrow length should be a little shorter than the given draw. As long as the arrow can reach the rest, basically, any value for length is acceptable.

Based on most users’ choices, we can say that the most common arrow length for a 29” draw is 27.5”. This is the number chosen by most archers.

It’s believed to be balanced between providing good performance and keeping users safe. Since it’s shorter than the normal length, the shot will be more powerful and precise. And it still isn’t too short to fall off the arrow rest so it prevents health hazards for archers.

Indeed, if you’re drawing at 29”, using a 27.5” carbon arrow would be ideal for the best results.

But as we’ve said, there isn’t only one single perfect option. If you’re a newbie who just got into bowhunting, this is something you should remember.

Based on the user’s body size, style, or stance, there are a lot of other suitable values for the length for a 29-inch draw.

Other Options for Arrow Length for a 29” Draw

1. If the Arrow Length Is Equal to Draw Length:

If the length of the arrow and the draw are the same, you don’t need to make complex calculations. Just buy an arrow that has a length equal to your bow’s draw. For example, a a 29-inch draw length bow will need a 29” arrow.

If the lengths are equal, then the arrow will stay on the rest and stay consistent. It also won’t be too long to eventually become limber. This is since excessive length on an arrow will make it limber and affect the arrow flight.

An equal length for arrows will help you to shoot accurately and powerfully. It’s the best option for beginners or just about everyone.

This is actually the safest cut for an arrow. Most of the time, 1” shorter won’t make your arrow fall off the rest. It’s ideal for someone who wants more powerful shots but is still afraid of cutting the arrow too much.

Your shot will be faster and more penetrative, while your overall performance will also be better. But you should also know that such a length isn’t so suitable for hunting.

This length is used more for practice or target shooting because it lacks arrow stiffness. Arrow stiffness is important when shooting far distances and for certain hunting areas.

This is the second safest option to choose for arrow length. Often, a 1” cut isn’t a satisfying length for skilled archers because it’s still a long arrow that is heavier and slower.

A heavy weight can affect the flight of the arrow since it’ll end up bending it until the arrow reaches the target. It decreases the overall accuracy.

The excessive weight also means less kinetic power and penetration. You may hit the target but you won’t be able to kill it and so you’ll lose your game.

Overall though, a 1”1/4 less than the bow’s draw length is still a good option. But it’s only ideal for practice and indoor shooting.

Experienced archers will usually choose this arrow length. A half-inch less than the previous one may not be too different, but the results lead to significant changes.

Your shots will dramatically improve in many aspects like power, speed, and precision. And because it’s still quite risky to cut away 2” from your arrow, a length of 1” 1/2 is the safest and best choice.

The arrow will likely stay on the arrow rest which is vital. This means that using arrows that are 1”1/2 shorter than their draw lengths can greatly improve your results without being too risky.

Many people don’t usually recommend this cut even though it can offer the most powerful and precise shots. This is since if you cut 2” down from a normal arrow, then it may not reach the target and just stay on the arrow rest.

If you’re shooting with such a bow, you may encounter problems. In some cases, people even get injured or end up injuring the people around them during the shooting as well.

We suggest that you only try this strategy if you know and are sure that you’re actually capable of handling it.

Though modern technology has helped reduce length to increase power and accuracy, there’s always a limit to its benefits. An arrow that is too short can actually also be harmful to you.

The arrow rest is the foundation of an arrow. It helps the arrow stay still and preserve the arrow flight. Without it, you will never hit your target. The arrow will go up or down as there’s nothing to hold them.

If you shoot when the arrow isn’t on the rest, there are chances it will go into obstacles. It can stab either the riser or the grip which will result in breaks or snaps. You can also destroy your entire bow all because of a loss of some inches from your arrow length.

Moreover, when it breaks, the arrow can send sharp pieces into your hands or arms. These shards become dangerous health hazards and end up hurting you or another person nearby.

And if you’re really unlucky, you can even shoot the arrow straight into your hands. It’s very risky so we advise you to take caution.

A long arrow will likely go down quicker in its flight and then miss the target or deadly zone of the animal. The excess length of the arrow makes it more limber, increasing the arrow spine and affecting the flight.

At this point, we can say that 27.5” is the ideal length for a 29” draw. Whether it’s in terms of the user’s choices or mathematical calculations, it really is the ideal option.

1” 1/2 less from the normal length brings more power, accuracy, and consistency. If you’re using a compound bow with a 29-inch draw, try a 27.5 arrow and you definitely won’t be disappointed.

We hope this post gave you useful information about the arrow-length-for-29-inch-draw question. Now go ahead and choose the length for you!

FINAL TIP: Now that you know more about the ideal arrow length for you, we recommend learning more about restringing bows and the costs along with it.