Can You Put a Rifle Scope on a Pellet Gun? Answer Explained! 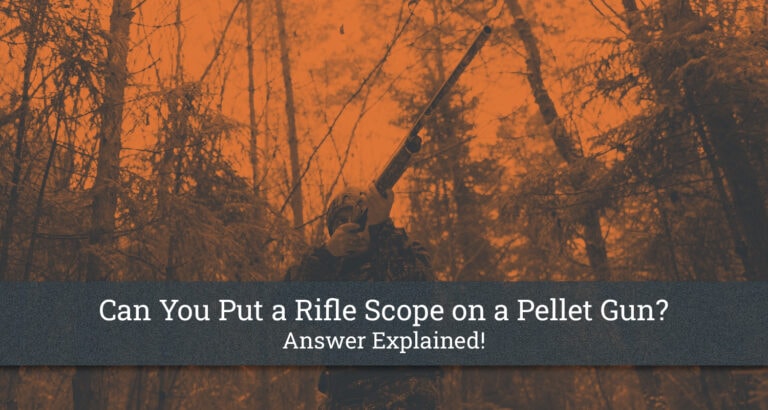 Pellet guns are a great way for new shooters to practice their marksmanship fundamentals without worrying about smoke, debris, shell casings, and recoil!

This leads them to mount their trusted rifle scopes onto their air guns.

Let’s look at why it may be a bad idea to put rifle scopes on pellet guns. We’ll see why this is the case and what makes pellet rifles against rifle scopes.

Is It Possible to Put a Rifle Scope on a Pellet Gun?

While it is certainly POSSIBLE to use certain rifle scope brands on a pellet gun, it is recommended that you use pellet gun/air rifle scopes on air rifles.

This will save you money and prevent headaches down the line. Besides, rifle scopes are better for long distances.

An air gun scope should be enough for your pellets.

Conventional and air rifles usually have the same ergonomics, which makes people think it’s easy enough to mount a rifle scope on a pellet gun.

The question is, why should you?

Rifle scopes are designed for center-fire recoil, meaning they can handle the kickback of conventional rifles.

While pellet guns may feel recoilless to users, they are far from conventional.

Pellet guns, in particular the spring kind, have double-reverse recoil, which is a term that indicates that the rifle will move forward before jerking back.

This means that center-fire rifle scopes will shake more excessively than they’re accustomed to.

Too much shaking could destroy their internal systems and leave you with a broken scope. Yikes!

What Scopes Work Best on a Pellet Gun?

This is because these scopes are designed to handle the double-recoil and vibrations brought on by a pellet gun.

This DURABILITY is the major advantage air scopes have over rifle scopes.

While it may be tempting to use a farther-seeing optic, it won’t help if it breaks apart after use!

It’s best to use an optic designed for your rifle, as this will allow you to maintain your accuracy, see your target from far away and have the stability to hit it every time.

If you’re plinking, FIXED ones will do. If you’re hunting, you’ll need multiple options.

How Does a Pellet Gun Work?

Pellet guns are designed to fire via spring or gas pistons.

They also work via pneumatic potential energy, compressed gas, or even cartridges like regular firearms.

Each of these methods yields different velocities and effectiveness.

However, they all allow a pellet gun to launch its projectiles (the pellets) with no smoke, dust, or recoil.

At least, the average shooter will not feel any recoil, thanks to the pellet gun’s two-way recoil system, which causes the forward and backward motion to counteract each other.

This shaking is what causes center-recoil rifle scopes to get damaged.

On average, pellet guns launch a bb between 850 and 930 FPS, which is enough to injure or even kill if you aren’t careful!

They are primarily used for varmint hunting and competitive shooting.

How Are Pellet Guns Different from Air Rifles?

Pellet guns are largely similar to air rifles and are most often used interchangeably, as they both operate using the same piston systems.

What’s the difference, then?

The main difference, and conceivably the only real difference between the two, is that pellet guns fire round BBs while air rifles fire shuttlecock-shaped ammo.

This difference in pellet shape affects aerodynamics, which affects trajectory, distance traveled, accuracy, and a host of other factors.

The choice of which shape to use will depend on your needs.

Both rifles shoot extremely small pellets, using the compression system to send them far enough away that a scope is needed to ensure accuracy.

Can You Put a Scope on an Air Rifle?

You are highly encouraged to use air rifle scopes on air rifles, as you will not be able to see where your round is going or your aiming point without it.

Using air rifle scopes will allow you to hit your target and watch it land, as the two-way recoil ensures that where you aim is where you hit.

You must AVOID putting non-air rifle scopes on air rifles to avoid subjecting them to vibrations that will damage your optics or ruin their ability to focus.

While using rifle scopes is discouraged on air rifles, companies like Leupold, Nightforce, and Vortex swear that their rifles are up to the task and can handle all the moving and shaking.

If your company does not make such promises, you must avoid the temptation of mounting rifle scopes on air rifles at all costs. It’s not worth it.

Many dedicated air rifle brands will serve you well, such as Hawke, UTG, and BSA. It’s best to choose from their dedicated air gun selection for your needs.

Are Air Rifle Scopes and Pellet Gun Scopes the Same?

It’s safe to assume that scopes that work for air rifle scopes will work on pellet gun scopes.

They both share the same propulsion systems, ergonomics, and even ammo types.

This means that air rifle scope manufacturers will carry dedicated pellet gun scopes or allow you to use their air rifle line on your pellet guns.

While using scopes designed for your specific product is best, you can’t go wrong using air rifle scopes on your pellet guns.

It will work better than firearm rifle scopes, that’s for sure.

It IS possible to mount rifle scopes on pellet air guns as long as they are rated to handle it.

Not all rifle scopes will work, as their internals can get scrambled by the two-way recoil.

The best action is to invest in a dedicated scope for air rifles. This allows you to hold zero, ride the internal recoil, and ensure you can sight your rifle for a long time.