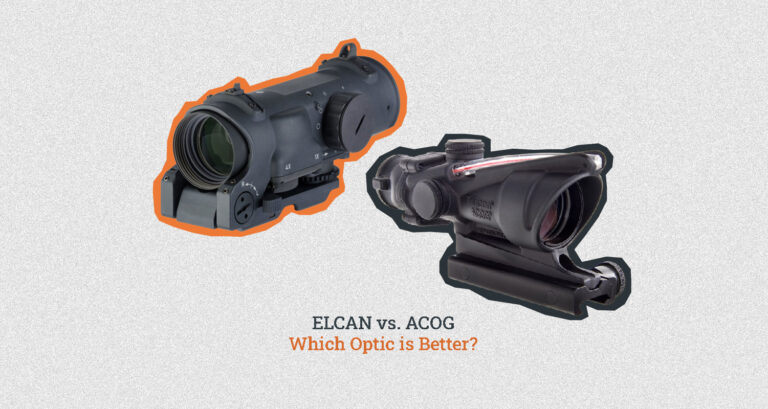 Choosing between the ELCAN vs ACOG combat optics? Not sure which sight is right for you?

I’ve reviewed both scopes, their features, pros, cons, and performance. In this review, I’ll be comparing each scope and giving a verdict on which is better.

The ELCAN Specter is made with forged aluminum to make it more RUGGED and durable. The weight of this optic is 23 oz.

It’s a variable zoom scope, with magnification levels from 1-4x. It has a quick switch lever to quickly transition between the two zoom levels.

The eye relief on the ELCAN Specter is 70mm or around 2.75 inches, which is good for a compact scope like this.

The ELCAN scope offers different reticle options, but the reticle used by ELCAN is a basic crosshair BDC reticle.

However, the BDC reticle on the ELCAN is calibrated to the 4x magnification level, so make sure it’s ZEROED using the 4x zoom if you decide to purchase it.

Additionally, the ELCAN optic has reticle illumination, which is convenient for shooting in low-light situations.

You might have to buy an upgraded mount that works on the ELCAN, which is an additional cost.

FUN FACT: Both scopes are being used in special forces. ELCAN optics are used by the Canadian military, while the United States military uses Trijicon ACOG optics.

The Trijicon ACOG is a 3.5x or 4x single zoom level scope made with 7075 T6 AL material for combat-tested durability.

The short eye box can be problematic on higher recoil weapons like the FN SCAR.

The good eye relief and field of view, at least on the 3.5x zoom, make the ACOG a COMFORTABLE scope.

Reticle illumination is only through tritium for the 4x, while the 3.5x is fiber-optic-capable.

The Trijicon ACOG has a traditional mount system that works on any standard mil-spec rail.

Therefore, it can accommodate many aftermarket mounts from LaRue, Geissele, and American Defense.

Now that I’ve discussed each optic individually, the next step is comparing them head-to-head.

Build quality is SUPERB on both; both are built like a tank!

However, there are some differences between both.

The ACOG’s weight ranges from 10.9 to 14 ounces, while the weight of the ELCAN ranges from 23 to 24.8 ounces. I can sense this difference when hiking with them.

The ELCAN scope is durable in its own right.

However, being made of forged aluminum and combat tested, the ACOG has much more capability here.

It’s been tested in more real-world scenarios, and the lighter weight means it can tank hits better.

While the ELCAN is durable and has a decent build, the ACOG wins in this category.

While both scopes have been tested in different scenarios, even in real-life battles, one is easier to use for most people.

The one thing the ELCAN optic has going for it is the zoom switch lever, which can toggle between 1x and 4x zoom with a simple flick.

This feature makes it easier for a shooter to use in a pinch at close range without scoping out.

However, the ACOG has an underrated benefit – the mount system.

The mount system is compatible with a lot more aftermarket mount systems. The ACOG mount can fit with no issues if you have a rifle with mil-spec rails.

The ACOG will work with almost ANY rifle you pick up and any aftermarket mount you buy.

Also, the ELCAN’s 1x zoom isn’t the same as a red dot due to the scope shadow effect anyways.

This category is a win for ELCAN, with some caveats.

The ACOG is more limited, with only one magnification level available for the 4x or 3.5x option.

The ELCAN, on the other hand, has a switch lever toggling the 1-4x zoom. I found this switch lever really useful when I want to change to a close-quarters-ready optic.

However, it comes with two drawbacks.

The scope is heavier than the ACOG due to more lenses. Additionally, there’s heavy scope shadow when using the 1x lens.

This means it’s not the same as using a red dot due to the limited image you can see from different angles.

Additionally, you can choose to mount a canted red dot or iron sight on the ACOG, as it’s lighter. Adding it to the ELCAN punishes the heavier weight more.

In the magnification category, the ELCAN still wins, but the implementation isn’t perfect.

The next category when comparing the two optics is eye relief. One scope stands out like a sore thumb here – the 4x ACOG optic.

It only has a 38.1mm eye relief, which any shooter can struggle with, especially on a higher recoil rifle.

The other ACOG optic, the 3.5x, has a 61mm eye relief, which is greatly improved over the previous generation 4x.

The ELCAN optic, however, has generous eye relief at 70mm. This stays the same from the 1x to the 4x zoom level.

It offers an advantage when trying to scope faster in close-quarters situations as well as from a farther distance.

While the ELCAN wins here, the ACOG isn’t far behind.

The field of view on both optics is decent.

However, the field of view is slightly worse on the ACOG option that most people will choose.

On the 4x, the field of view is equal to the 4x lens from the ELCAN. However, most people will choose the 3.5x for better eye relief.

The glass quality on both optics is good at the higher zoom levels. Fortunately, getting your shot on target isn’t an issue with either the ELCAN or the ACOG!

However, the ELCAN has a disadvantage when using the short-range 1x optic.

It has a noticeable scope shadow when aiming down the sights, which can be disorienting and reduce accuracy.

It just isn’t the same as a dedicated CQB optic like a red dot, which is much faster to aim in without any scope shadow.

However, the ACOG comes back with BETTER reticle options.

You can choose from different options like the triangle, donut, chevron, horseshoe/dot, crosshair, and MGO.

The chevron is an especially popular choice on the ACOG optic because the chevron on the reticle matches up with the shoulders of a target at 100 meters range.

Meanwhile, the ELCAN only has a BDC reticle option.

Additionally, the reticle is calibrated to the 4x zoom, meaning shots with the 1x may not be accurate.

I say these are evenly matched in this category.

Which one you choose depends if you prefer having more choices in your reticle for the setup OR having a better image in darker situations.

The only clear advantage the ELCAN has over the ACOG is the 1-4x variable zoom modes for the CQB range.

However, aiming with it is a hassle with the scope shadow.

If you want to save money, go for the ACOG.

After reading this comparison, you may still have questions about the ELCAN or ACOG rifle optics. I’ve answered the most commonly asked ones below.

Is an ELCAN an LPVO?

No, the ELCAN isn’t a Low Power Variable Optic, although they do similar things.

The ELCAN is much MORE COMPACT but can only change between 1-4x zoom.

The LPVO is heavier in weight than the ELCAN but has more precision in changing zoom levels. Many LPVOs have different reticle options and have an illuminated reticle too.

If you don’t use a bullet drop compensating reticle, you might want to go with an LPVO instead.

What Range is an ACOG Good for?

The Trijicon optic is best used for shooting at targets 400 yards out. A shooter may struggle with anything closer because it only has a 3.5x or 4x zooms.

Mount a canted red dot if you want to shoot at closer range, as this will help you aim at closer targets without adding too much weight to your rifle.

What Distance Do You Zero an ACOG?

One hundred meters is a good range to zero an ACOG, as it maximizes the zoom level.

I must say, the battle of the ELCAN vs. ACOG rifle scopes is close.

Both are built like a tank and have great image quality. Any midrange shooter will appreciate their compact and low-weight nature!

My final thoughts on which one I’d pick is the ACOG because I like having a side mount or canted red dot for close quarters, and it costs a lot less.

However, if you prefer a more traditional dual zoom optic and don’t want to mount a canted one, the ELCAN will fit your needs better.

Either one is sure to fulfill your needs!