FFP vs SFP Scopes: Which Is Better for Long-Range & Hunting? 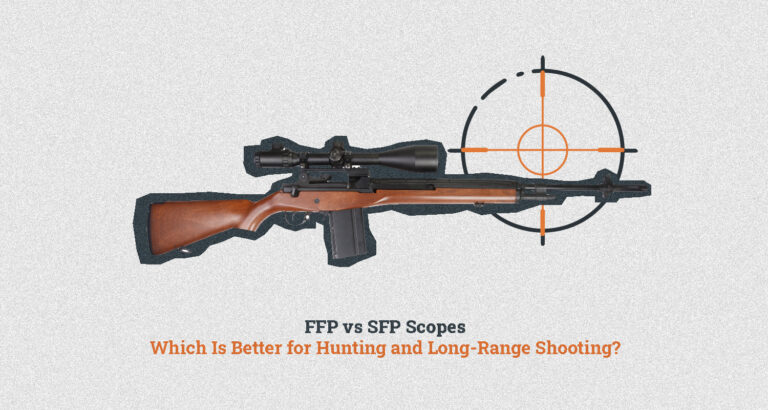 There isn’t a “best gun” among all types of guns; however, there IS a best gun for a specific activity.

The same goes for optics — the better option between First Focal Plane VS Second Focal Plane rifle scopes lies in the type of shooting activity you plan to do.

In this article, we’ll help YOU decide which you should go for and which is the better pick for your outdoor activities.

If we look at the reticle of a First Focal Plane vs. Second Focal Plane scope, an FFP rifle scope contains a reticle that follows or adjusts according to the scope’s magnification.

On the other hand, in contrast to the variable size of an FFP reticle, the SFP reticle is static. Thus, regardless of magnification, the reticle will have the same size.

Needless to say, there are advantages and disadvantages with both reticles.

This difference also makes one the better option depending on the kind of shooting or outdoor activity.

Beyond just the positioning of the reticle, these two optics differ in terms of their behavior when the scope’s magnification range is adjusted.

If you’re confused or if you’re having a hard time remembering the difference between the two, this line might help:

The first one follows, the second stays.

For First Focal Plane (FFP) Rifle Scopes, we know that the reticles change when the magnification setting changes.

This is due to the FFP’s reticle placement.

Contrary to common belief, the reticles of FFP rifle scopes are placed in the MIDDLE of the scope and not in front.

To be more specific, the reticle is between the magnification lenses and the erector assembly tube.

This positioning allows the marksman to have a varying reticle size.

This also means that the reticle in an FFP Rifle scope, the hash marks represent the SAME value, whether you are at the default setting or higher magnification range.

Generally, this characteristic makes it EASIER to use, whether at minimum or maximum magnification.

This implies that the unit of measurement per hash mark VARIES per level.

Normally, the SFP hash mark values are only true at MAXIMUM MAGNIFICATION. This is what manufacturers usually follow.

The hash marks are accurate at full magnification of 18x. Meaning each mark represents 1 MOA.

This is the case for MOST rifle scopes. However, it will be smart to double-check this setting before taking your SFP rifle scope with you.

Taking these behaviors and characteristics into account, there are THREE main questions to help us better decide between First Focal Plane VS Second Focal Plane.

SFP Scope vs FFP Scope: Which Is Better for Long-Range Shooting?

First Focal Plane rifle scopes are preferred when it comes to shooting at longer distances.

As the unit of measure in the HASH MARKS ARE ALWAYS TRUE, this makes it easier for the shooter to use this as a reference.

In addition, as the crosshairs are more accurate and visible at higher powers, FFPs are normally preferred over SFPs during precision rifle competitions.

It’s much easier and FASTER to point and shoot and highly useful when you utilize holdovers.

Moreover, spot impacts or target corrections are much easier to identify since hash marks are always true.

This increases speed but compromises VISIBILITY.

If you’re using maximum settings, the sizing of the reticle may obstruct your line of sight.

For example: if your target is small and at a distance, the marks may block your sight picture which would make placement tricky.

On the other hand, there can be instances when the reticle is too small when magnification is not adjusted.

This proves to be a challenge especially when you’re hunting at night or shooting in a low-lit environment.

If this is you, an illuminated reticle is worth considering. This helps solve the light issue without compromising the advantages of an FFP rifle scope.

The clear answer to “First Focal Plane VS Second Focal Plane — which is better for shooting at longer ranges?”

SFP Scope vs FFP Scope: What Is Better for Hunting?

For hunting, the better companion would be a Second Focal Plane riflescope.

The majority of gun enthusiasts and professionals grew up using an SFP scope, so a lot are used to and aware of the implications of the hash marks on reticles found on second focal planes.

As the reticle lines stay the same, shooters have access to more precision at higher magnification.

For some hunters, it’s easier to zero in at their aiming points as the marks do not obscure the exact location you want to target.

Moreover, for short-range defensive shooting or if you need precision without the speed component during hunting activities, SFP rifle scope might be the better and simpler choice.

The main challenge or issue for an SFP scope would then be the MATH.

As the mark represents different values per level, you would always have to approximate or do mental math before firing a shot.

It may be an issue for some but this “skill” gets better with practice.

You can also opt for an SFP optic stick that contains simple divisible settings around the magnification ring.

For example, the most common scope has a magnification setting that maxes out to 24x.

This is easy math because you can easily identify the ½, ⅓, or ¼ calibration.

If you’re looking for the best optics for your AR-15, you can take a look at this guide!

SFP Scope vs FFP Scope: Which Is the Better Option?

To settle all debates, the answer to this question is — IT DEPENDS.

Due to the way the reticle resizes according to the changes in the magnification setting, a marksman can release a shot much faster with compromising accuracy.

In addition, more advanced options even have an illuminated reticle and offer wider magnifications.

Shooters also prefer a variable scope because there is a guarantee that shifts in point of impact are minimized, if not totally eradicated.

This is due to the placement of the first focal plane reticle.

Whichever magnification range the marksman is at, there is little to no possibility that the target and point of impact are misaligned.

THIS DOESN’T MEAN THAT THE SECOND FOCAL PLANE SCOPES ARE SECOND BEST.

For hunters, a Second Focal Plane Scope is the better option. The simplicity of the reticle does not obstruct the target, whether it’s in a bright or low-lit environment.

Moreover, they are much cheaper too. It is often the optic that is used in standard rifle scopes.

YES, there may be a risk of having a gap between the target and point of impact as one shifts through high magnification and low settings.

HOWEVER, this is all up to the shooter.

Over time, an SFP scope can also increase the marksmanship of shooters.

Although there might be advantages and disadvantages to both, the answer to First Focal Plane VS Second Focal Plane debate all boils down to PREFERENCE and which scope you are most comfortable using.

To learn more about scopes, here are some of the best air rifle scopes to choose from!

This is because they integrate more advanced technology. In effect, this innovation removes the manual or mental calculations needed before a shooter can fire the rifle.

Moreover, you simply can rely on the Mil Scale of the scope to get you that precision you need.

As mentioned, the FFP scope can deliver both precision and speed, especially when shooting long-range.

When there needs to be rapid shooting, a sniper can rely on precision reticles for accuracy.

The FFP scope is arguably the top choice as it allows the user to identify and implement corrections — which is crucial for officers on duty.

They won’t have to rely on their own measurements or calculations, which lessens human error.

FFP vs SFP: Does the Military Use FFP Scopes?

The same goes for Military officers — a First Focal Plane rifle scope would be able to perform better and deliver both speed and accuracy.

Today, there are multiple and a wide range of advancements when it comes to an FFP scope.

There are a LOT of options now compared to when FFP reticles were first introduced.

In addition to increasing the illumination of the optics, manufacturers have also improved on the magnification levels as well.

For example, the magnification ranges of these reticles have been wider than ever and are incredibly crisp and powerful.

Both optics provide clarity and better precision for any shooting application.

The main difference between a first focal plane scope and a second focal plane rifle scope lies in the reticle placement.

This carries multiple implications, as well as advantages and disadvantages in certain situations.

However, all these are just factors. The decision or verdict ultimately lies on both your primary activities AND your preference.

FINAL TIP: To help you get started, here is a quick guide on the best rifle scopes under $500!