Glass Etched vs. Wire Reticles: Which is Better to Use? 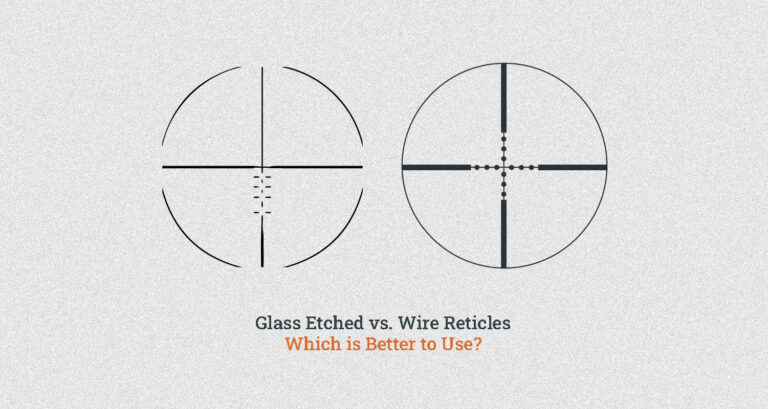 The reticle makes its home inside the scope’s tube, hidden between the headline-grabbing object and the eyepiece.

The commitment of today’s manufacturers shows in the quality, but information on their construction and influence on light transmission is limited.

The performance is evident, but is there a performance difference between traditional wire reticle and etched glass versions?

An Overview of the Wire Reticle

Before reticle options became more prevalent, hunters and snipers alike would use reticle-less sights or iron sights to hit their targets.

Then, there was the use of wire.

It’s simple enough to use because it’s solid and durable, can be manipulated to form various thicknesses, and they don’t obstruct the incoming transmittance of light.

However, the wire crosshairs support themselves and are subject to damage in various ways, including pressure and force from drops, repetitive recoil, improper installation, and more.

Although they can be powerful, many active and long-time shooters can speak to the contrary.

They’ve seen more than their fair share of reticles crack right in front of their eyes. We’re not knocking wire reticles; they fulfill their role admirably.

But it does happen; wire reticles can break and fall out of position, and their design is constrained since wire can only be thinner and flattened in a limited number of ways.

An Overview of the Glass-Etched Reticle

While there are several techniques to make a glass-etched reticle, one of the most popular is to have it laser cut into the glass.

There is a widespread misconception that glass-etched reticles are weak and unreliable and that you cannot rely on glass for accuracy.

On the downside, glass-etched reticles are more expensive because engineers must pay close attention to a rifle scope, light transmission, and floating components.

If even a particle of dust breaks loose during assembly or becomes adhered to the laser-etched glass, the entire glass-etched reticle is ruined.

This ensures exact alignment and accurate ranging and eliminates breakage.

Other reticle technologies lose their accuracy over time due to their physical limitations.

A glass-etched reticle is for you if you want intricate markings for holdover (elevation and windage), range estimating, and measuring.

Both glass-etched and wire reticles have advantages and disadvantages.

However, world-class manufacturers employ glass-etched reticles because they are superior.

To maintain your rifle scope sight for a long time, you must ensure it contains the most outstanding and robust components.

While wire reticles are cheaper than etched glass reticles, getting the most bang for your buck may ultimately come down to bonding the glass parts rather than the reticle itself.

The reticle’s integrity is determined by how exact the turrets are with the dial movements of the crosshair.

When mounted inside a rifle scope, glass-etched reticles can be kept in place by a lock ring, bonding glue, and screws. This is the common installation standard.

Other Types of Reticles

A glass reticle or wire reticle is not the only reticle option available. A sophisticated, first-focal-plane reticle with range estimation is not for everyone.

We did not include these reticles because they are too simple or have many service-related issues due to being very specific in parts and manufacturers.

Wire reticles have been used for many years.

You may have a different opinion from the person next to you, but they are not awful. However, this is no reason to dismiss glass-etched reticles.

Glass-etched reticles may be the only way to go if you want a reticle that will last as long as the integrity of your lifetime rifle sight.

They are more durable, precise, and worth the price!

The main distinction is the quantity of specific information the latter may supply.

Everybody has differing opinions, but the ultimate say is yours!