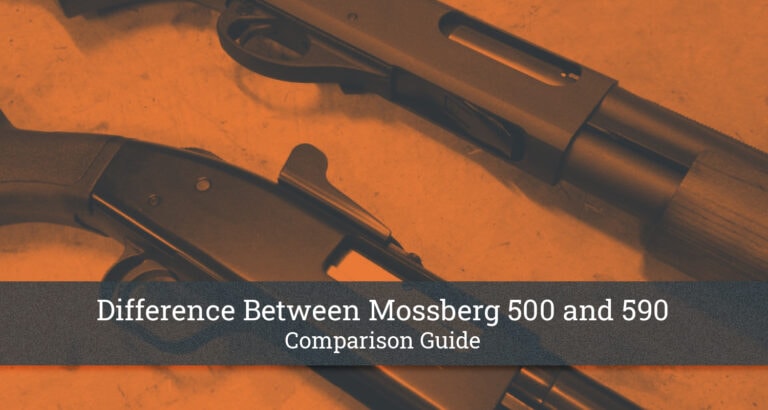 Shotguns have never been a boring topic. Many gun owners focus on seeking the right shotgun to fit their needs, whether that be hunting, home defense, or range shooting.

To support you in finding the best one, I recommend Mossberg, one of the most popular shotgun brands on the market. Specifically, I will provide detailed information about two specific Mossberg shotguns, the 500 and 590, along with the differences between them.

Both products are based on the same basic concept designed by Carl Benson, and they always come out with updated models to satisfy user’s needs.

The unique thing is that they share the same primary receiver and action.

However, Mossberg’s series still has a lot of distinguishing points such as bore size, stock, adjustable fiber optic sight, magazine feed system, forearm materials, barrel length, and choke options, so the Mossberg 500 and 590 have clear differences, which I will go over below.

The Mossberg 500 is a pump-action shotgun that can shoot 12 gauge ammunition. With six rounds in maximum capacity, this gun can hold more than average shotguns of the same caliber.

However, you can get it at an affordable price. It somehow costs less than the average 12 gauge shotgun.

It is also relatively light, weighing about 7.25 lbs, which is lighter compared to other shotguns.

With the barrel’s length being about 24 inches and the overall length approximately 44.25 inches, it’s similar to other 12-gauge shotguns in terms of length.

After many innovations, the Mossberg 500 has proven to be one of the most versatile and excellent shotgun platforms. It’s been used by various police units and movie productions worldwide.

It offers a model to suit different applications and all kinds of customers. People looking for home defense options, law enforcement officers, and even the military use it.

It comes with a lot of useful features such as a dual extractor, easy-to-field strip, a ribbed vent barrel with twin bead sights, an ambidextrous top-mounted safety, steel bolt lockup, and twin action bars.

It is one of the rugged and reliable shotguns you can get. I wholeheartedly recommend it. It’s my most venerable shotgun, even after decades of use.

This Mossberg model is a 12-gauge pump-action shotgun. It accommodates 3 inches in two and three quarter-inch shells.

Besides that, it has a full-length magazine tube. When loaded with two and three-quarter-inch shells, the magazine will hold eight in the firearm. It has an extra round in the chamber, giving it a 9 shell capacity.

When loaded in 3 inches, the magazine can hold seven. It also has a heavy wall barrel.

This variant comes with full features such as Dole extractors wherein the receiver is drilled and tapped for mounting rail or optics. It has safety settings that are intuitive when you push the weapon and get ready to fire.

Moreover, it has a bayonet lug for mounting in the M9 bayonet. While most civilians wouldn’t want a bayonet on their shotgun, I’d imagine military breachers finding some use for it.

This model is sold in a variety of variations so that you can have a lot of options. It is effortless to clean and maintain by spraying the inside of the receiver as well. I’ve also found the barrel easy to remove for whatever purpose.

Differences Between the Mossberg 500 vs 590

This is probably the most significant differentiating factor between the Mossberg 500 and 590 that I suggest you consider carefully.

The magazines of the Mossberg 500 are closed at the muzzle end. It’s held in place by bolting into the threaded hole at the endpoint of the mag tube.

However, the 590’s magazine is designed to be opened at the muzzle end. Besides, the barrels fit around the magazine tube and are held on by the cap nut at the endpoint.

The 590 magazine’s parts are easy to clean and remove, as removing the nut allows the removal of the  magazine spring and followers. Both of the shotguns have polymer trigger guards, safety, and standard barrels. The Mossberg 590 has bayonet lugs and ghost ring sights, while the Mossberg 500 doesn’t.

Also, the 590 features a thicker barrel, steel safety, and steel trigger guard. At the same time, the 500 has a plastic trigger and plastic safety switch. Thus, it seems that the 590 is more durable than the 500.

I’ve found both models to accept Magpul furniture if you’re all in on polymer parts, though the 590 seems easier to customize.

The Mossberg 500 is available in 18-inch and 20-inch barrels, depending on the magazine capacity you want. There are also other options with the 500 model.

Meanwhile, the Mossberg 590 is only available in a 20-inch barrel variant and flush fit magazine tube. Both will allow you to fire beanbag rounds, though I’d recommend a longer barrel if you would need them to quell a riot.

The 500 model is heavy-duty for home defense, police duty, and security work. It usually has a 28” barrel and wood stock. It can hold five rounds in the magazine tube plus one in the chamber.

However, the 590 is more suitable as a military or hunting shotgun in harsh conditions. It has composite stocks and holds eight rounds in its magazine tube. I’ve found this high rate of fire to be invaluable when breaching doors.

The costs of both aren’t too different. As gun enthusiasts, you should put your concern on the quality and purpose more, instead of price.

I suppose that each one has different strong and weak points. If you wonder what will be right for you, I think you should consider your needs first and then make your choice, whether that be for home defense, hunting, etc.

I hope you’ll now get to buy your best shotgun after reading about the differences between Mossberg 500 and 590!