Rifle Scope Magnification vs Distance: What You Should Know 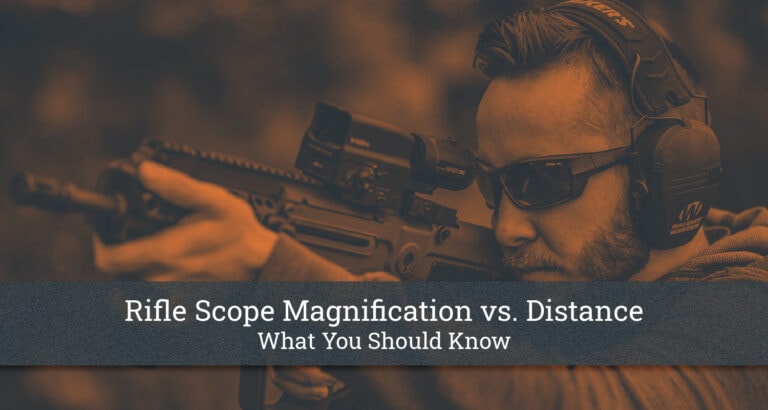 We can all agree on how important accuracy is whenever we’re out hunting or target shooting. AND we’re sure you’ll also agree the right magnification scope is crucial to perfect your aim, right?

Today, we’ll be talking about rifle scope magnification vs distance, and why those two are important for your accuracy.

One of the MOST COMMON MISTAKES first-timers make is choosing standard rifle scope magnification lenses thinking it’s enough for such a far distance.

Sure you’ll be able to see your targets through the glass, even if they’re on the far point. But, ASK YOURSELF: Will you be able to hit it with great accuracy?

Difference Between Magnification and Distance

This is where the difference between magnification and distance comes in.

Although the MAGNIFICATION POWER of your rifle scopes is 100% okay, it doesn’t always mean it can perform well at such a distance.

Whenever you take a peek into your rifle scope, you’ll more or less see the image better. And that’s all thanks to your variable magnification scopes.

It’s a lot closer and clearer to look at, as compared to using the rifle without a scope magnification.

Although we wish the concept was as simple as that, the reality is, there’s a lot of intricacies involved in keeping your rifle scope magnification accurate in reference to the distance of your target.

Magnification plays an important role in your rifle scope.

When we talk of distance, we talk of the space in between you and your target. The range could be as close as arm’s length, or as far as an entire football field.

Similar to magnification scopes, there are a number of factors and categories worth considering when it comes to the range: whether you’re shooting a moving target or not.

Hunting usually involves great distances to practice your aim. You need to know how to use a rifle scope properly to see far distances and provide you with great stability.

You’d also want to choose lenses by taking into consideration the size of your game. Whether it’s a big or small target like prairie dogs, you shouldn’t have any problem.

When this is the case, choosing variable scopes is usually the best. With a variable magnification scope, you can swiftly change the magnification of your lens to get that shot easily.

This is also very important, considering you have to be always on the go whenever you’re hunting.

Target shooting is a lot easier as compared to hunting scenarios. It’s more predictable and allows you to practice target shooting and precision long-range shooting, hitting with better accuracy each time.

That being the case, you’re better off with magnification scopes and lenses that have a limited field of view and fixed power. You can focus on the shot better, which lets you focus on what you’re aiming for.

Rifle Scope Magnification vs. Distance: Why They Go Together

Like we said earlier, magnification rifle scopes give you a clear image of your target. Whether it’s near or far, you can always look at the target as if it was just close to you.

What does magnification power have to do with distance then? Well, let’s take an example.

In other terms, a target that’s viewed through a 6x magnification scope will appear 6 times closer than its actual distance. Targets at 600 yards will basically appear as if they were only 100 yards away.

The higher magnification you choose, the more likely you’ll close the range between you and your target. The two work together in making sure you have a clear and full view of your target.

Drawbacks of Choosing a Magnified Scope

Not all rifle scopes are the same:

You’re probably thinking, “Why not go all in and go for the variable scopes which closes the range between me and my targets?”

While we wish we could say it’s easy as that, the reality is, it isn’t.

Let’s discuss what these drawbacks are. Things like light transmission, weight, mirage distortion, etc all play a role when using a magnified scope.

Shooting will always have some recoil/kickback. Once you fire the bullet, expect some recoil to slightly PUSH you back, especially if you’re firing at an angle.

For example, when you’re shooting a regular handheld gun, there’s no reason for you to worry about kickback.

Sure it may cause minor arm discomfort, but it should go away in a few minutes or so. It’s not much of a cause of concern. Plus, you won’t be needing a magnification objective lens for a handheld gun.

But what if, instead of using a handheld gun, you’re using a hunting rifle. Now that’s a different topic worth talking about because you can now potentially cause injury to your eye.

Remember, you’ll be looking through the magnification lens of your gun scope.

Whenever your targets are so far and you want to close in the range, expect the recoil to be powerful! Fair warning, it may take you by surprise. Worse, the eye reticle may leave your eyes a little bruised right after.

Your aim isn’t always improved by choosing an objective lens with a high magnification level. At times, your scope lens may even be the cause of why you aren’t able to perfect your shots.

Allow us to shed some light (pun intended):

And if you can’t see properly, then how do you expect to fire your shot accurately? Who would’ve thought that light was so crucial, right?!

Fast Fact: Having a high magnification level for your lens tends to be more unstable in the long run.

The image may appear so close to you, and it probably looks perfect. But whenever you make a slight side movement, it CAN disorient you.

You need to be very careful with your movements.

Another problem that occurs whenever your image is too magnified is it can cause distortions to your view and your scope’s glass.

Whenever your rifle emits some heat, it can cause mirage distortion which is detrimental to your aim.

Using magnified scopes in humid or hot weather conditions tends to be a little harder. The glass on your scope may fog, and you just won’t be able to see clearly.

At times, you might even see the same image more than once! Because of the magnified image, it’ll be a lot harder for you to focus your aim.

Magnification lens and optics tend to be pricey. This is especially true if you’re looking at a premium or high-quality magnification lens, which can give you a quality image each time.

That being said, are you willing to buy expensive magnification optics? If you ask us, there’s a number of magnification power scopes out there that’ll hardly break your bank.

They may not have the same magnification level as the expensive ones, but at least the optics provide better aim and stability. Plus, image quality isn’t bad at all.

Finally, the higher the magnification level of your objective lens, the heavier it is.

This is because there are multiple lenses inside your scope to make sure it can magnify the target image. It isn’t just made of glass, as some might think.

Having a heavy and magnified lens isn’t always advisable, especially if you’re hunting. Just imagine the struggle of having to lug a heavy scope around. Yikes!

Rifle scope magnification vs distance. Should they always be taken together? Yes!

So fellow hunters…Don’t just choose a scope with the highest magnification. You might compromise the accuracy at farther distances.