Home
|
Guns
|
Thompson Center Compass Vs. Ruger American: Which One Is Superior 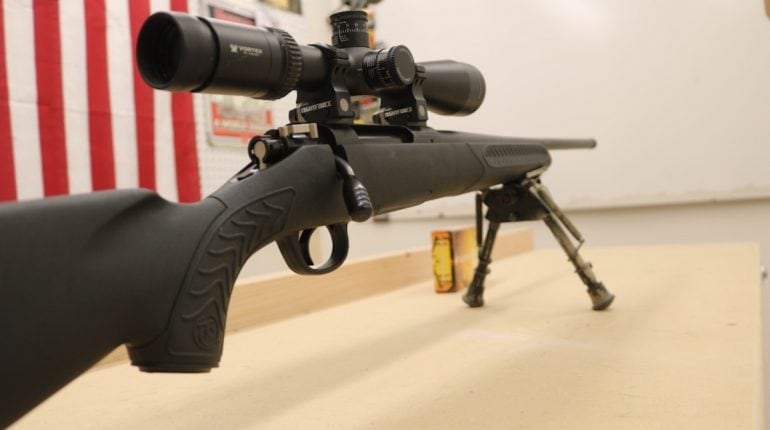 Every firearm enthusiast knows the rule of thumb when it comes to shopping weapon: “You get what you pay for”. That being said, in the case you are willing to look around the market, it’s still possible to acquire solid products at reasonable costs. In the budget bolt-action rifle category nowadays, two names stand out from the rest: Thompson Center Compass and Ruger American. Generally speaking, these weapons have distinct pros and cons but which one is the overall winner in a Thompson Center Compass Vs. Ruger American competition?

Having a hard time deciding whether you should go for the Compass or the Ruger? If that is so, this article got something for you. Right down below is an in-depth comparison that covers various characteristics of the Thompson Center Compass and Ruger American. After you firmly grasp what the rifles have to offer, it’s simple to come up with a sensible investment. Different shooters would likely value different qualities so in the end, it’s up to you to make the call.  Take your time and determine which rifle suits you most.

Quick Overviews Of The Rifles 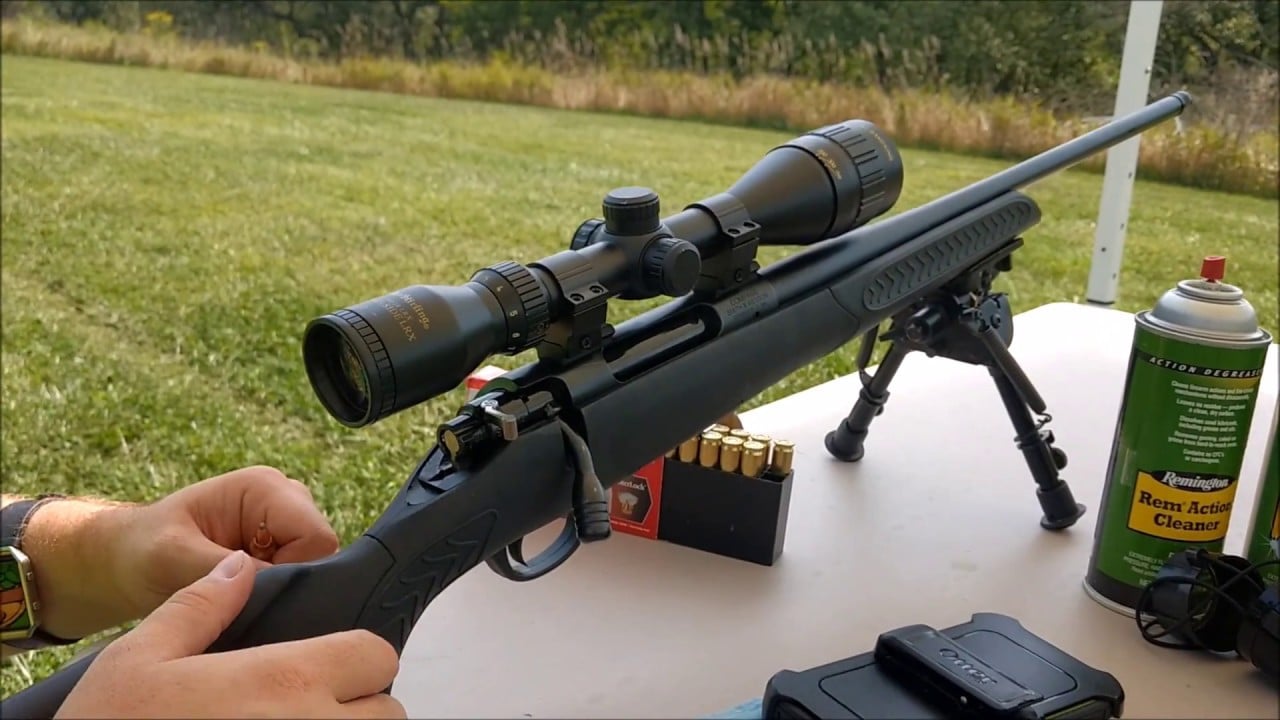 Made to match a variety of budgets, Thompson Center Compass is able to provide people with feature-right shooting experiences. Being silencer-compatible, the rifle receives a lot of praises from shooters that want to give their ears a break. In term of configuration, Thompson Center offers the Compass in 2 barrel lengths (22 inches and 24 inches), 4 rates of twist (1:8, 1:9, 1:10 and 1:12) and no less than 10 calibers (6.5 Creedmoor, 7MM-08, .22-250 REM, .243 WIN, .270 WIN, .308 WIN,…). While the rifle could work with multiple types of ammunition, it’s strongly advised to use high-grade rounds in order to achieve optimum performance. 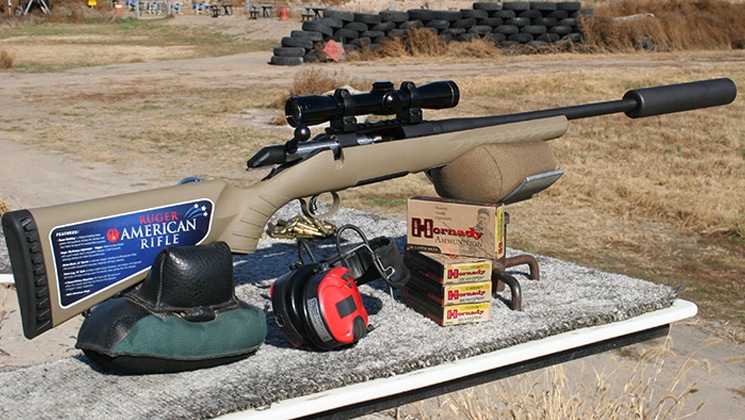 Ergonomic, light and easy to handle, Ruger American is an excellent bolt-action rifle when it comes to cost-effectiveness. Compared to its competitors in the price range, the rifle possesses several advanced features without making significant compromises in quality. For the configuration, the manufacturer offers the Ruger in 3 rates of twist (1:8, 1:9 and 1:10), 2 magazine capacity (4 + 1 and 5 +1) and more than 5 calibers (.243 WIN, .270 WIN, .308 WIN, .30-06 SPRG, .22-250 REM,…). While the selection is indeed not as wide as Thompson Center Compass, you still have many configurations to choose here.

Essential Features Of The Rifles 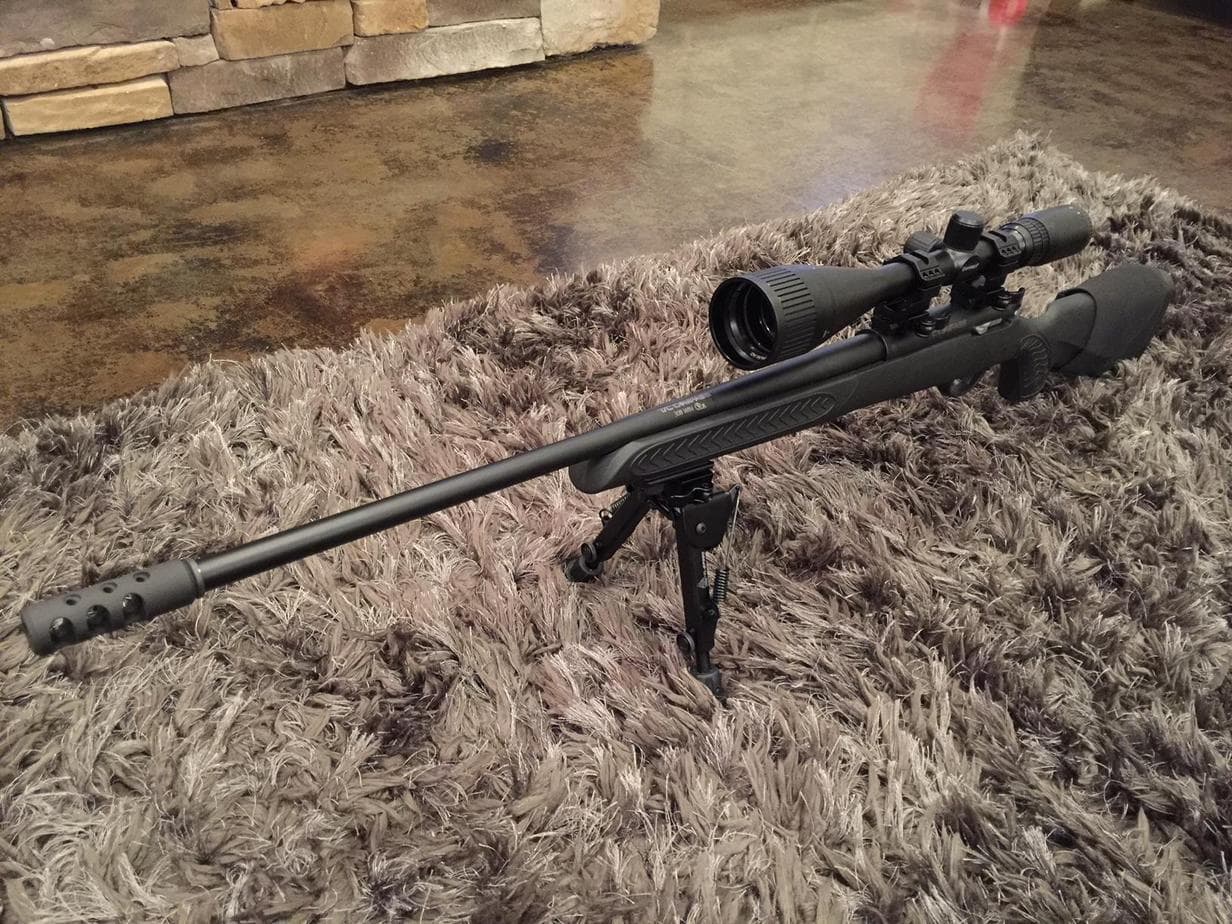 The muzzle of every Compass is threaded before leaving the factory and that means you could outfit the rifle with silencer, flash hider, muzzle brake,… You don’t need additional gunsmithing to mount these accessories but play it safe and make sure that it’s legal to do so first. For instance, private ownership of silencer is illegal in a couple of states like California, Hawaii, Massachusetts and so on. As a result, to avoid getting into unnecessary trouble with the lawn, take a quick glance at the firearm regulation of where you are living.

For shooters to land shot after shot on target, constant trigger pull plays a vital role and the Compass tackle that issue effectively and efficiently. Once the rifle arrives from the factory, most shooters see that the trigger pull is set at 5 pounds which is quite heavy for practical uses. Fortunately, it’s less than a problem as people could adjust the trigger pull as they see fit with relative ease from 3.5 pounds to 5 pounds. Since the trigger is also a single-stage design, some shooter might complain about the lack of a take-upstage.

The 5R rifling of the Compass features 5 slightly rounded grooves instead of sharp edges and the result is a gentle pattern that collects less fouling.  As a result, barrel maintenance is a breeze and you could shoot for a long time on the field before you must clean the barrel. Of course, in order to preserve the longevity of the barrel and the rifle as a whole, you should clean the rifle after each use. If possible, stick with non-corrosive ammunition so as to reduce fouling built-up further.

Similar to other bolt-action rifles on the market, the Compass utilizes a removable magazine that is made from polymer. The magazine is compact, light and forgiving to work with so it well suited for challenging condition on the outdoors. To eject the magazine, all you have to do is to press on the paddle which is located at the front of the magazine well. Reloading is straightforward and if needed, you could load rounds straight through the ejection port while the magazine remains attached.

The stock of the Compass is composite and to improve handling, it has grip patterns on the forend and grip. Overall, the patterns work well enough with most gloves and they would also cause no troubles to your bare hands. Additionally, the stock features a rubber pad that let shooter scope with the recoil but for most of the time, the recoil kick is manageable. Thanks to the natural shape, the stock permits the shooter to get a hold of it regardless of the position. There are some discussions about adding an adjustable length of pull stock to the rifle. 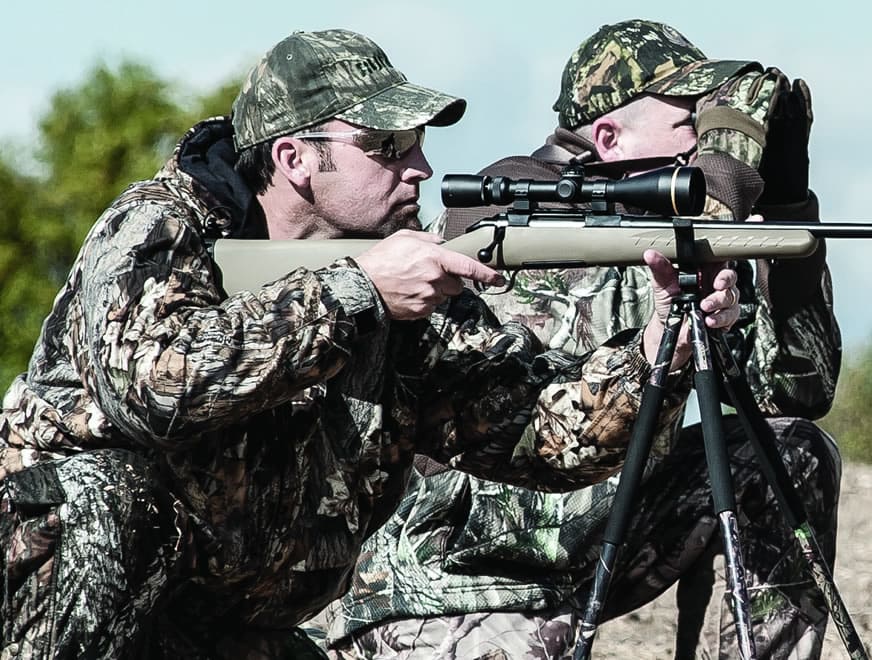 That action of the Ruger is based around its 3-lug bolt that offers slightly more clearance around the scope and somewhat faster bolt cycling rate. The fluid movement of the bolt also receives substantial boosts from the short 70-degree throw and therefore facilitates fast firing. Considering the layout, the shooters shall have plenty of space for their finger as well as a low mounted scope. The finish of the action seems lackluster though as several people detect marks of machine tools on the bolt surfaces.

Have you ever see the AccuTrigger of a Savage rifle? Well, the manufacturer of the Ruger uses a more or less similar trigger-level design. Depending on preferences, the trigger compression of the rifle could be adjusted between 3 and 5 pounds. By setting the trigger pull heavy, the Ruger trigger makes people feel like they are using a 2-stage trigger without being actually designed like that.

While other rifles tend to put the safety on the receiver, the safety of the Ruger lies on its trigger housing behind the cocking indicator. Usually, a tang-mounted safety lets the shooter get the rifle ready to fire quietly without involving too much movement.  Because the safety itself does not lock the action after you engage it, you could load the rifle with ammunition while the safety is on. Once you move the safety to “safe”, you would hear an audible click but you should be able to quietly push the safety to “fire”.

The magazine of the Ruger is a rotary design that holds between 4 and 5 round, depending on the caliber of the rifle. As the magazine is made out of plastic, it’s light, simple to handle and perform admirably on the field.  Thanks to the smooth profile, the magazine slips into the magazine well without much difficulty. Moreover, the magazine achieves a firm hold on the well and that is exactly why rattling is not an issue. Although the catch (magazine” and the corresponding shelf (well) are plastic, their durability is superb.

Form the first glance, the stock of the Ruger seems sleek and so it gives the rifle a compact feel. That being said, the stock is mediocre when it comes to grip though it possesses some textures on the surfaces. On a shooting bench, the stock should give you no problem but if you take it out on a hunt, there could be certain difficulties. The spot on the stock where you place your cheek is somewhat skinny and might give you bumps while firing.

Regarding the butt pad, it’s not top-tier but still squishy enough for the average budget bolt-action rifle

Conclusion: Thompson Center Compass and Ruger American have similar features here and there yet in the end, preferences remain decisive. In the case you value comfort and quality, Thompson Center Compass is your best bet. On the other hand, if you care about practicality and ease of use, Ruger American shall not let you down. Generally speaking, you would be able to make the right call by taking your personal taste and habit into account

Rifle Scopes That Are Compatible

Thompson Center Compass and Ruger American have pre-installed scope mounting so they could accept multiple models of optics nowadays.  Instead of making separate purchases, several stores offer the rifles in packages that include mounting rings and scope which allow you to save some money. Anyway, here are a couple of scopes that the Compass and the Ruger they are often seen with: 3-9×50 Redfield Revolution, Leupold 3-9×40 Freedom, Burris E1 3-9×40,…

As people mostly use the rifles in short-to-medium range shooting, the 3-9x magnification setting is actually quite popular. For shooting a long range, Pinnacle 5-30×50 is an excellent choice. As always, you need to take the recoil into consideration before buying: the bigger the round, the stronger the kick. The recoil of a 30-06 SPRG round is more powerful than a .243 WIN, keep that in mind while searching for scopes. On the bright side, once you manage to secure a good optic for your rifle then installation is a breeze.

Accessories The Rifles Could Use

Similar to other bolt-action rifles on the market, Thompson Center Compass and Ruger American are able accessories such as scope, sling and so on. However, the threaded muzzle of the Compass allows it to readily accept attachment like silencer, muzzle break,… at moment notice. Therefore, when it comes to the ability to be outfitted with rifle accessories, Thompson Center Compass narrowly beat Ruger American. While certain shooters are indeed pleased with the Ruger basic form, it’s the Compass that delivers more configuration choices.

Optimal Accuracy Of The Rifles

It goes without saying that the actual precision of a rifle on the field relies a lot on the skills and techniques of the shooter. Using proper ammunition, Thompson Center Compass in the hand of a trained shooter could achieve 1 – 1.2 inches groupings at around 100 yards. Despite the fact that it’s a budget firearm, the accuracy of the Compass is quite sufficient for usual needs. The rifle constant precision is also good enough for people that are new to bolt-action rifles and want to get some first-hand experience.

Because of its well-aligned design and floated barrel, Ruger American is able to deliver a fairly level of accuracy. At the distance of 100 yards or so, the Ruger could produce groupings between 0.9 and 1.1 inches.

Although it’s not a stellar performance, such precision should be adequate for recreational shooting. The excellent handling characteristic of the rifle would let you nail targets at a variety of range with relative ease.         If you conclude that the accuracy of factory-manufactured rounds is inadequate, handloading is an alternative.

Conclusion: Assuming that both rifles are in the same caliber and use the same ammo, a shooter should obtain slightly better results with Ruger American compared to Thompson Center Compass. However, it’s worth noting that the difference in precision is negligible and as a result, it would not have substantial impacts on your experience.

At this point, it’s highly likely that you already know what the rifles have to offer in term of features, accessories and so on. Overall, Thompson Center Compass and Ruger American are great bolt-action rifles for budget-minded shooters that want something affordable. They both have strong points and drawbacks so it’s hard to say which one is the best without taking the user style into account. That is why to decide which one is the best rifle for you, you have to crosscheck your preferences with the characteristics of the rifles. Think about the qualities you seek in a rifle and then make your choice accordingly.