What Do the Numbers on a Scope Mean? [Guide for Beginners] 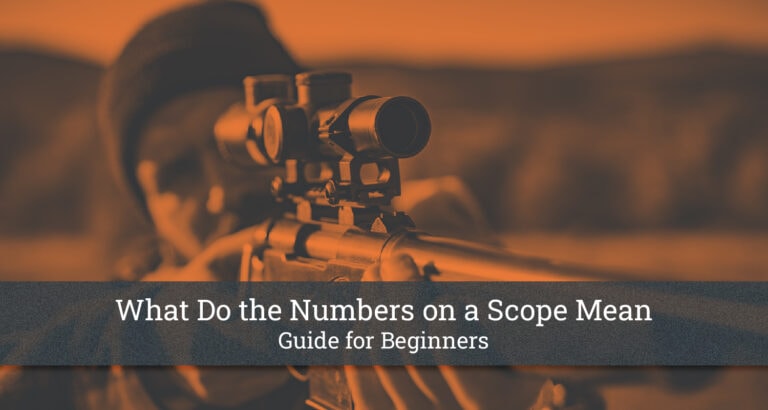 Don’t know what the numbers on a rifle scope mean?

Don’t know what the numbers on the rifle scope are for?

If you’re a beginner and have limited knowledge about firearms, this guide will help you out.

Soon enough, you’ll know everything about the rifle scopes, scope lens, and more!

What Do the Numbers Mean on a Rifle Scope?

The numbers on a rifle scope may look a bit tricky at the beginning, but they are a piece of cake to read with the naked eye when you finally understand how they work.

A good example would be a mid-range variable power scope with this number written on it:

In this example, the scope magnification range is 3 to 9x.

Since the numbers range from 3 to 9, the scope can be zoomed between 3x and 9x magnification.

Still having trouble understanding the numbers?

Let’s go even DEEPER and focus on how each number affects performance. Taking the same example of 3 – 9 x 40:

Not all rifle scopes are the same, so you might be confused when you see numbers that look different from the example we gave above.

You have to familiarize yourself with the two main types of scopes (fixed and variable power scopes) to understand what the different numbers mean:

A fixed power scope is a scope that has a fixed or non-adjustable magnification setting.

A fixed powered scope features a magnification range from as low as 2.5x up to a fixed 20x power, depending on the scope model, of course.

A fixed power scope will only show a number like 6 x 45mm, wherein the first number displays the fixed magnification of 6 and the second number shows the diameter of the ocular lens.

Variable power scopes feature a magnification range that can be adjusted from one power to another.

The magnification adjustment is done with a power adjustment ring located on an eyepiece that rotates.

But modern variable power scope models now feature a range of magnifications that averages 8x but can reach a higher magnification of 25x.

Just recently, variable power riflescopes with 10x zoom ranges have entered the market, classifying them as a higher power scope!

Variable power scopes are excellent because they can cover a broad range of shooting and hunting scenarios.

Magnification numbers on rifle scopes are obviously important when choosing a scope.

They simply show how far your rifle scope can zoom in and out.

A large scope with the highest magnification is not always necessary, so here are a few factors to think about when reading magnification numbers and choosing the best scope for you:

The main purpose of knowing the magnification numbers on a rifle scope is to know how far you can see.

To put that into play:

Ask yourself if you need this for your hunting or shooting scenarios. If not, maybe variable scopes are better for you.

Many beginners often believe they should choose a scope with the highest magnification they can find.

Don’t follow the crowd. What are you going to do with such a large scope?

Zooming too far can lead to various distortions that negatively impact your accuracy.

Instead, choose a scope that lets you see clearly for only the effective distances you need.

Other Important Numbers on the Rifle Scope

Magnification isn’t the only to consider when choosing a scope.

There are other specifications you should familiarize yourself with before making a purchase:

This helps you select the rings for fitting the scope onto the rifle.

You can often see this on the box or manual of the scope.

The most standard scope tube diameter is 30 mm, but you can also find tube sizes that are 1 inch and 34 mm.

These tubes allow light to pass through in a wider area, making them useful for a larger range of elevation adjustment and higher resolution on rifle scopes.

The normal field vision of a human iris is around a 210 degrees horizontal arc in front of your naked eye.

When you begin to focus on an object to identify its features, the field of view gets smaller.

When you focus on your targets at a distance, the field of view gets smaller.

Most scopes list a field of view parameter at different ranges to help you gauge the difference between them.

Therefore, hunters prefer scopes with a larger FOV. But, if you’re just a beginner, start small!

The scope’s windage and elevation determine how much you can adjust the reticle to the left and right or up and down on a rifle.

The adjustments are typically given in MOA or MRAD, and in some cases, mm.

This is used in shooting over very long distances to measure the average point of impact of a bullet.

It determines how much your bullet deviates over a given distance and is measured in inches.

Here are examples to further explain this:

The Milliradian or MRAD determines the angle bullets need to travel to hit a given target.

When bullets are shot over longer ranges, they travel in a circular arc rather than a straight line.

The farther they go before hitting the target, the bigger the circular arc they travel.

This circular arc that the bullets travel is measured in MRAD.

The eye relief shows how far away your eye needs to be from the eyepiece to get a full field of view.

Basically, if your eye was right next to the rear lens or ocular lens of your sniper rifle scope, then eye relief is the distance you need to back away so that the full field of view is visible.

Size of the Objective Lens

The size of the objective lens has a significant effect on your shot.

This results in a significantly brighter and more detailed image, which is especially important when shooting in conditions with insufficient light, such as cloudy weather or dusk.

Exit Pupil of a Magnification

The exit pupil refers to the diameter of how much light travels through the rifle scope.

The exit pupil should be between 2mm to 9mm. A very small exit pupil isn’t good enough to make the image bright and clear.

The larger the exit pupil, the better it will be in low light conditions.

You can calculate the exit pupil number of a rifle scope by dividing the diameter of the objective lenses by the scope’s lower magnification power or level.

IMPORTANT NOTE #1: The human pupil can expand to a maximum of imprecisely 8 mm in almost complete darkness. The naked eye will not perceive the entire field of vision created by the 60 mm scope lens at 4x magnification as much light enters the scope.

IMPORTANT NOTE #2: A rifle scope does not require an objective lens as large as a pair of binoculars, as you will be zooming in on a single target and will not be viewing a large area through the scope.

Can the Scope Numbers Be Decreased?

Once you’ve purchased a scope, you may be wondering whether you can make changes or alternations.

We’re here to tell you that while it is POSSIBLE, none of them are really beneficial, and many of them can be detrimental to your scope.

We suggest getting a new scope instead if you’re unhappy with the scope numbers.

If you DO wish to make changes, here are some things you can keep in mind:

Chromatic aberration can be a serious issue for used and damaged scopes.

Without compensation for chromatic aberration, a new rifle scope can make a rainbow-like effect.

This happens when water droplets hit the lens, altering the light entering the scope.

It worsens as you zoom the scope magnification range.

You can always adjust your scope within the provided parameters.

Just twist the power ring to zoom in or out.

Be careful, though — too much magnification isn’t necessary!

The scope’s magnification power affects its clarity and dimness.

Further zooming typically makes a scope less clear, especially if you did not purchase a good scope.

The ambient lighting will also affect how well you can see through the scope — scopes designed for long-range aiming usually correct this issue.

Let’s test if you really understand what the scope numbers mean.

The 4 to 12 marking mean that the scope is a variable-powered scope.

The 4 to 12 means that the scope has a magnification range that starts at 4x and adjusts up to 12x.

50, on the other hand, means that the scope has a 50mm objective lens.

This means that a mid-range rifle scope can magnify as low as 4x or as high as 12x.

The magnification range starts at 6x and can adjust up to 24x.

The 3-9×50 numbers mean that the model has a power magnification range that starts at 3x and can adjust up to 9x.

The last number, 50, means that the scope has an objective that is 50mm around.

This scope’s numbers tell us that the max zoom range is 12x.

This scope can provide aiming points approximately out to 500 yards.

This is the type of number you see on FIXED power scopes.

The magnification power of a 12×50 is 12 times larger than normal unaided vision.

The “40mm” refers to the objective lens diameter in millimeters.

Is a Bigger Objective Lens Better?

The larger the objective diameter, the greater the light-collecting power. This results in higher resolution and a brighter image.

However, a large objective lens also means a bulkier and heavier scope, which can be a downside in some hunting scenarios.

What Magnification Range Do Snipers Use?

Snipers often use a 2x-12x magnification level, which is suitable for short to long ranges.

What Magnification Scope Do Navy Seal Snipers Use?

They use scopes that are designed to shoot well within 600 yards.

It allows them enough space to make any necessary adjustments to get the best shot in various distances.

What Do the Numbers on a Spotting Scope Mean?

Reading a spotting scope is the same as reading a fixed power scope.

The first number represents the magnification and the second one refers to the diameter of the lens.

You don’t want to come in your shooting or hunting session with a magnification that’s TOO LOW or TOO HIGH. It can make or break your shot!

As long as you understand the numbers and buy the appropriate scope, all you need to worry about now is refining your skills as a shooter.