Where Are Nikon Scopes Made? [Origins + List of Products] 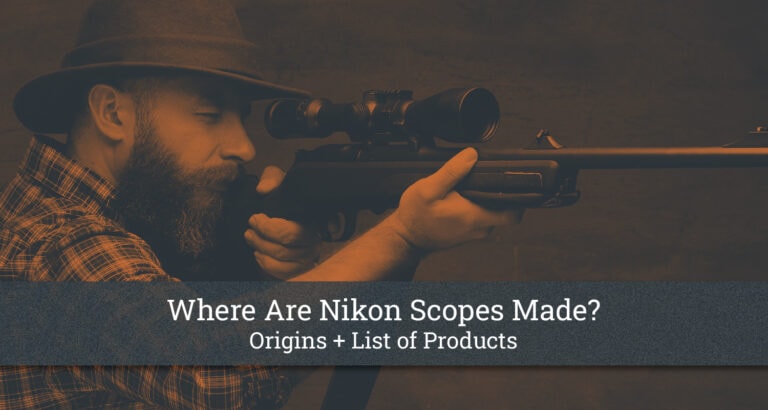 Where are Nikon scopes made?

They were among the first businesses to mass-produce optical lenses and have a well-earned reputation for creating some of the most incredible lenses in the world.

The company swiftly established itself as a prominent participant in the sporting optics industry despite being better known in the camera sector.

Although Nikon is a well-known Japanese brand, many people are interested in learning where Nikon scopes were made.

To help you decide whether Nikon gunsights are an excellent purchase, you might also be interested to learn about Nikon scopes’ manufacturing origins.

Where Are Nikon Rifle Scopes Made or Manufactured

So, where exactly are Nikon scopes made?

Most Nikon models are built and manufactured in Japan, China, and the Philippines.

The “Made in Japan” slogan, which typically connotes superior quality, is used by many Japanese businesses.

But it’s no secret that many well-known firms outsource portions of their manufacturing.

Where are Nikon scopes made, and is this company an exception? Here are the most well-known Nikon scope family and their manufacturing locations.

Nikon Scope Models & Where They Were Made

The first generation was manufactured in China, and the second was made in the Philippines.

Three models of these scopes are available: 3-9x40mm, 4-12x40mm, and 6-24x50mm. These gunsights are all dust, fog, waterproof, shockproof, and waterproof.

This series was initially produced in Thailand, but after the company discontinued creating scopes, production shifted to the Philippines.

Currently, all of the models in this series are being made in the Philippines.

The Prostaff P2 series of scopes consisted of 20 different versions, with power magnification ranging from 1-4×20 to 10x22x50.

A few specialized scope versions for shotguns and muzzleloaders are also part of this series.

Except for the rimfire variants, all Prostaff scopes have a fixed parallax setting of 100 yards, which is parallax free at 50 yards.

This series was first created in Thailand and then moved to the Philippines.

All the models in this series were made in the Philippines until the company stopped making scopes.

The Nikon Prostaff P3 series has 20 specialized scope models, with power magnification ranging from 2-732 to 6-1840 combinations.

For muzzleloaders, shotguns, and crossbows, specific scope versions were also produced as part of this series.

The models of the P5 scope were manufactured in the Philippines.

The P5 scope series included eight different models, with magnifications ranging from 2.5-1042 to 6-2450.

The Prostaff P7 was produced in China.

When Nikon launched the P3 and P5 scope series, the Nikon Prostaff P7 scopes were phased out. It was the first P series to be introduced by the company.

The Buckmaster scopes include the first-generation and second-generation Buckmasters II series. These were manufactured in the Philippines.

The multi-coated lens system on the Nikon Buckmaster I has an anti-reflective capability of over 92 percent.

You’d be able to enjoy the best optical clarity and light transmission, both of which are essential for large game hunting.

Nikon eventually built the Monarch scopes in Thailand before finally making them in the Philippines.

Most models are famous for offering distinct adjustment tools and optimum image quality. You may anticipate things like the BDC system and parallax correction.

The Nikon Monarch series were once regarded as Nikon’s premier line of scopes. The first Monarch scopes were constructed in the Japanese factory when they were first released.

Nikon was using the Monarch M5 series when it discontinued making gunsights.

Seven different scope models were available in this iteration of the Nikon Monarch series, with magnifications ranging from 3-1242 to 5-2050.

At one time, Nikon offered the Monarch X scope series as an UPGRADE over the Monarch scope versions that were previously available.

Even though these are not compact scopes, they are well suited for ALL lighting situations, with the 2.5-1056 specifically designed for hunting in minimal light conditions.

For the price, this series was awe-inspiring; plus, it was made in Japan!

Nikon Monarch X scopes were formally introduced to upgrade the Standard Monarch Scope Models. For the price, this series was impressive and was produced in Japan.

Likewise, this scope series was made in Japan and has incredibly high-quality glass for the price!

Previously positioned as Nikon’s top line and a step beyond the Monarch and Monarch X series, the Nikon Monarch Gold series was once sold as such.

The Monarch Gold scopes are considered an improvement above the Monarch X scopes and other Monarch models because of their superior components.

Unfortunately, these Monarch models were discontinued after a few years due to their cost, which was at the very top of Nikon’s scope offerings.

The P-Tactical series was made in China when it was first released. When Nikon discontinued making these, they were made in the Philippines.

There were 12 different scope versions in the Nikon P-Tactical series, which included a red dot model dubbed the P-Tactical Superdot and a 4-1240 model.

This series, which focused on tactical shooting and featured scopes with caliber-specific BDC reticles in.223 and.308 configurations, was more of an ENTRY-LEVEL series.

The models of M-Tactical scope were produced in the Philippines and focused on tactical shooting.

This series provided P-Tactical scopes with enhanced optics and functionality at a premium price tag.

The five scope models in this series have magnifications ranging from 1-424 to 4-1642.

The M-Tactical series featured BDC reticles calibrated to the.223 and.308 calibers, just like the P-Tactical scopes.

The Black Force 1000 was manufactured in the Philippines.

There was just one model in the Nikon Black Force 1000 scope series, which came in a 1-4x24mm variation.

This 30mm tube-based scope was also made with an AR platform in mind.

Black X1000 scopes were created in the Philippines.

The Nikon Black X1000 line of scopes was advertised as a second focus sight designed for long-distance shooting on an AR platform.

This series included five different scope versions with power magnifications starting from 4-16×50 to 6×50.

Nikon FX1000 scopes were produced in the Philippines with a 4x to 16x power magnification range.

The 30mm tube was used to construct the Nikon Black FX1000 line of scopes.

They were built as the first focal plane (FFP) gunsights with the long-range shooting market in mind, where the FFP configuration has grown to be a very well-liked choice.

The company initially entered the riflescope industry to produce optical equipment for the Japanese military during World War II.

The company expanded during World War II to nineteen plants and 23,000 workers, providing the Japanese military with equipment like binoculars, lenses, bomb sights, and periscopes.

Nippon Kōgaku returned to produce its whole product line of non-military goods in a single factory after the Korean war.

A renowned producer of gunsights, rangefinders, binoculars, and range finders, the Nikon brand of scopes appears to have initially reached the US market in the late 1950s.

In the 1960s and 1970s, the company continued EXPANDING its presence in the American sporting optics market and providing fresh, cutting-edge models and designs.

The company developed a fantastic line of variable-powered rifle sight products from its initial fixed-power models.

Given how many outdoor enthusiasts were not professional photographers, the Nikon cameras most certainly contributed significantly to the success of their scope line.

As the company expanded its selection of gunsights, it could provide optics for nearly every demand and price point!

In addition to delivering gunsights marketed toward the general hunting community, the company also developed its gunsights to incorporate scope models created to target:

Despite not having a US base, the company experienced a level of success in the US shooting market that is uncommon for non-U.S. companies, based makers of gunsights.

FUN FACT: The company’s revenue from mirrorless cameras was relatively low. They also stopped producing film cameras and lenses in 2006.

Can Nikon Scopes Still Be Bought?

Given the company’s dominance in the scope industry, numerous merchants have some remaining stock of new Nikon scopes for sale at steep discounts.

First, it is essential to note that the Nikon Corporation is still operating. They recently decided to discontinue production and sales of Nikon gunsights.

The following are some of the typical queries about the company aside from where Nikon scopes were made.

Are Nikon Scopes Made in the USA?

Nikon, which has its headquarters in Japan, has never made gunsights in the United States.

Nearly all of Nikon’s riflescopes were produced in the Philippines when the company exited the market.

Why Did Nikon Scopes Go Out of Business?

The company has given up on the riflescope business due to a lack of demand. Binoculars and spotting scopes are still produced along with other kinds of optics.

Are Nikon Rifle Scopes Any Good?

Even though their products aren’t flawless, they consistently strike an excellent balance between quality and price.

How Do I Get My Nikon Scope Repaired?

Where Are Nikon Prostaff Scopes Made?

While some of the Nikon Prostaff Scopes were initially manufactured in China, the company eventually moved the production to the Philippines.

The answer is YES.

It essentially has a lifetime warranty under the original Nikon No-Fault program if you have a Nikon scope purchased before the warranty change.

For a year from the date of purchase at approved Nikon Service Facilities, your equipment is assured against any manufacturing flaws.

The warranty card is only given out at the initial purchase and cannot be transferred.

Are Their Binoculars Reliable?

The company is renowned for its excellent optics and overall standard of excellence in design, dependability, and quality!

Because of this, the company backs up its goods and offers a 7-year warranty on its binoculars. For its other products, it also provides a variety of contracts.

Before the company was called Nikon, it was initially known as the Nippon Kogaku K.K.

The business changed its name to Nikon Corporation in 1988 due to the popularity of its Nikon series of digital cameras.

The best scopes for hunting and shooting sports are the Nikons. They are well-liked for their high caliber and dependability.

Nikon scopes are not small-focus gunsights, but because Nikon binoculars use Porro prisms, they provide good vision even in low light and long eye relief.

These binoculars come with excellent optical quality and are reasonably priced. Due to the aspheric lenses on these binoculars, they also have a sharp center focus.

All new Monarch scopes are made in the Philippines to Nikon specifications, although Nikon lenses were made in Japan for the Monarch.

Late in 2019, the company announced that it would gradually stop producing gunsights as part of its optical division.

The company ceased making or selling rifle sights on January 1, 2020.

Hopefully, this guide answered your question, “Where are Nikon scopes made?” The company will maintain its rangefinder, binocular, and spotting scope lines.

Japan is not where the company produces any gunsight.

We discovered that most of its releases made Nikon scopes in the Philippines and China.

This article should answer your queries about the company. You should buy a Nikon scope model you want if you desire a superb product!