Where Are Sig Sauer Scopes Made? [History + Recommendations] 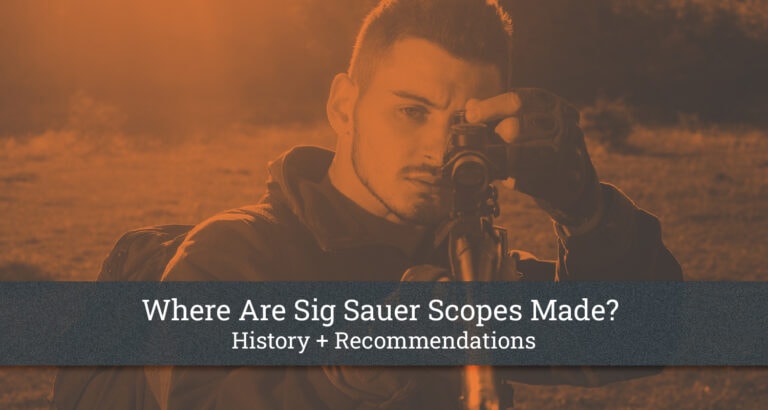 Ever wondered where Sig Sauer scopes are made?

If you’re considering buying a scope made in the USA, we’ve checked out Sig Sauer scopes for you.

This article has all the information you need about Sig Sauer manufacturing, history, and a few recommendations.

Where Are Sig Sauer Scopes Made?

Let’s check where Sig Sauer scopes are made and if “assembled” means the same.

Before we explore where the scopes are made, let’s check the difference between many scopes. The company can produce optics of three kinds: Sierra, Whiskey, and Tango.

Lastly, the Sierra line has more advanced hunting-focused optics that use high-tech parts. These are costly.

Sig Sauer discloses that their scopes are “assembled in the USA.” However, most materials in optics aren’t made in America.

The Tango line is made in the Philippines and Japan but assembled in the USA.

The Sierra line is made in the Philippines but assembled in the USA.

The company has a rich European history which started in Switzerland in 1853.

It was called the Swiss Wagon Factory but changed to the Swiss Industrial Company after being tasked with manufacturing rifles by the Swiss government.

The German company was called the Schweizerische Industrie-Gesellschaft, or “SIG.”

Sig Sauer slowly became one of the world’s renowned firearms manufacturers, entering the US market in the 1980s.

Sig Sauer is now in New Hampshire but has manufacturing plants and offices in Arkansas and Oregon.

What Is Sig Sauer Electro-Optics?

As the name suggests, Sig Sauer Electro-Optics is the category of scopes that integrates technology and electronics into the scope.

The most advanced technologies include the BDX (Ballistics Data Xchange) feature, used in the Sierra line of optics.

We have a few rifle scope recommendations for Sig Sauer scopes.

If you want a modern, high-tech hunting scope, the Sierra6 BDX is our recommendation. It has magnification levels from 3x to 18x.

The most impressive thing about this optic is the integration of technology.

It’s compatible with the free BDX app, where you can input your rifle’s specific setup to get optimized settings.

The scope also has an automated holdover that adjusts for distance and angle of shooting. The aiming point moves along and adapts to you!

There is a mark to show tilt angle and more for bullet drop at different ranges.

An advantage of these high-end features is that you can mount it on any rifle and use it with minimal adjusting.

The Sierra6 and other Sierra optics are made in the Philippines, not China, but assembled in the USA.

If you’re looking for a more rugged, back-to-basics, budget but quality optic, look no further than the Sig Sauer Whiskey 3.

This optic is an excellent low-light versatile scope!

It can be mounted on almost any gun, and it’s suited to firing at big game targets at a sub-200 yard range.

It’s one of the most AFFORDABLE optics in the market, easily competing and beating competitor sights from other companies.

This optic is worth the cost, especially if you don’t mind it being made in China.

NOTE: It is made in China but designed and put together in the USA.

USA Special Forces use Sig Sauer optics in many tactical applications. You don’t have to be a special forces member to get a similar optic in the Tango 6!

If the price is no object and you want no compromises, the Tango 6 has all the necessary accessories.

It has a first focal plane reticle, 56mm objective glass lens, and can zoom from 5x to 30x!

Accuracy is a top priority in the Tango 6, as the reticle is accurate to any distance and target you aim at.

Furthermore, rumor has it that it was developed with the help of newly hired former Leupold engineers.

And we all know Leupold is one of the renowned companies known for their top-quality glass!

First focal plane sights are great for defense, especially if you’re holding a position. You won’t need to calculate distance when engaging targets.

If you don’t want your sight coming from China, this one is made by Japanese hands.

REMINDER: The Tango 6 and other recommended optics are incompatible with pistols because they’re too big. The gun can’t support the weight, and mounts for these sights don’t exist for pistols.

Most Sig Sauer scopes aren’t made but assembled and designed in the USA. The crucial reason why the country of origin is important is QUALITY.

Sig Sauer ensures that the quality of the optics you’ll buy is the same whether it was made in New Hampshire or Beijing.