How Much Does a Mosin Nagant Cost? — Complete Price List 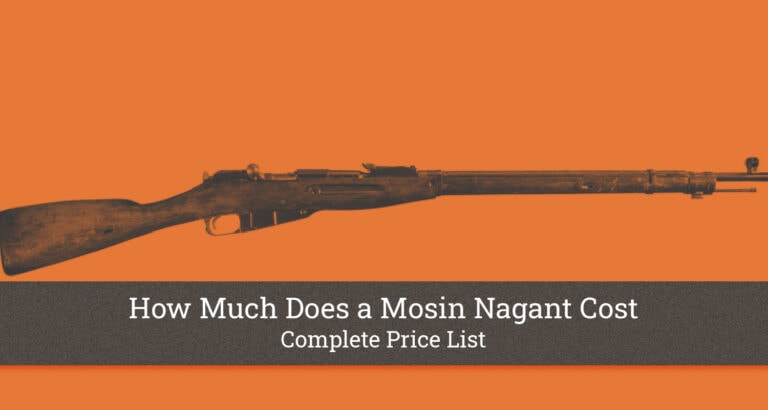 Mosin Nagant is a five-shot internal magazine-fed military rifle developed from 1882 to 1891. It was used by the Soviet Union and the Russian Empire.

Despite its old age, it’s still widely used all over the world these days. There are probably a thousand kinds of Mosin Nagants with different designs and features.

Thus, the price of this rifle varies all the time. In some shops, you’ll see that they have Mosin Nagant variants that cost around $100 to $200. But in several shops, they sell might sell it for up to $1000.

The Mosin Nagant rifle was used in many parts of the world, especially in Russia.

After being defeated by Turks armed with the Winchester repeating rifles, the Russian Army decided to modernize its weaponry.

They tested out magazine-fed rifles, a 3-line caliber rifle from Mosin, and a 3.5 line design by Nagant.

So, how does this bolt action rifle actually work, and how it came to be?

The combination of Nagant and Mosin’s designs was developed for the Russian Army and was used to design the 3-line rifle model 1891. There were many exchanges and compromises between the 2 of these designs which you’ll see on the 1891 variant.

One more interesting thing is that Nagant’s designs lacked an interrupter to keep two cartridges from being loaded, so it caused frequent feed failures. This is why they took Mosin’s interrupter and the feed mechanism design for the 1891 model.

After a long time, they produced the model 1891/30, which was redesigned from the old Model 1891. The interrupter was changed drastically because it was considered an unreliable piece of the rifle.

The Mosin-Nagant was used popularly in World War 2, so it’s not a overstep to say that these rifles have great historical value.

Factors That Affect Prices of the Mosin Nagant

Price is always a problem for those who want to collect rifles. Model and variant types are deciding factors for the price of a Mosin Nagant.

It will surprise you when you see some Mosin Nagant rifles for more than 1000 dollars while others are just 100 dollars.

Of course, when you purchase a high-priced rifle, you will receive more qualities and benefits. But that doesn’t mean that you won’t get good quality with the cheaper ones either.

Thus, we suppose that you should consider the amount of your budget first and then try to figure out what is most suitable for you.

Based on experience, we realize that the price of Mosin Nagant has never tended to go down. It’ll be good to be on the lookout for a good deal on it.

To sum up, the price of rifles plays a vital role in making our decision to purchase. The price should fit the quality and features.

Most people tend to be determined to buy a secondhand rifle because it’s cheaper. But the downside to that is that some sellers aren’t transparent about the rifle’s quality.

It’s still important to be alert and discerning when purchasing any weapon to add to your arsenal.

We hope that you find the best choice and get a good rifle with the help of this article!