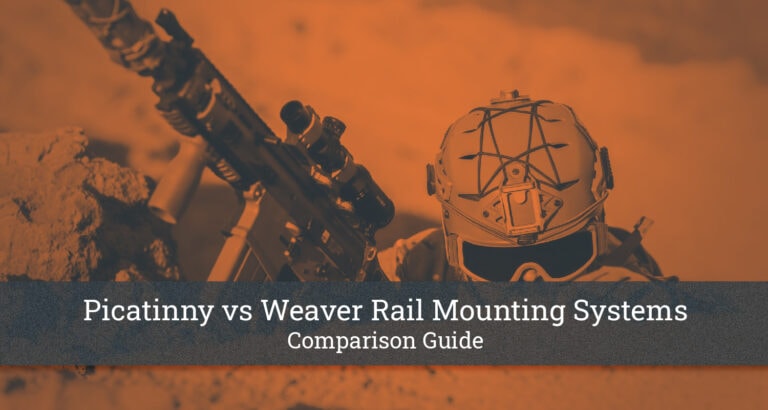 These days many firearms already come with a rail system, which means the kinds of scopes and accessories available to you will be dependent on that corresponding rail design.

The Picatinny and Weaver rails are still two of the most popular rail mount systems. They may look similar at first glance, but each rail makes for very different experiences.

Read more to find out who wins this matchup!

At that period of time, scopes were actually the ONLY ACCESSORIES people could mount on their guns that existed — which is what the Weaver rails were made for.

Originally, its main niche was to assembling optics.

Over time, the Weaver rails were slow to adapt to a market where manufacturers are constantly looking to improve their products.

Since its invention, the brand has both been able and unable to keep up with the many changes and advancements in the market.

However, it’s still possible to find a new or second-hand Weaver rifle scope in some marketplaces.

An older model of the Weaver rail mount may make use of a 2-piece system, which might cause some problems.

There’s no standard for the spacing so that you can get varying distances between the grooves within the same rail due to unevenly spaced grooves.

The difference in distances between one recoil groove from another is BOTH a PRO and a CON because once the rail mount is set, you’d have limited options on where you could place a scope.

This helped stabilize many Weaver accessories that originally didn’t have a locking bar in place — a defunct point now for more modern guns and mounting systems.

As we already mentioned earlier, the Picatinny rails were designed to make up for what the Weaver-style rails lacked.

Also known as the MIL-STD-1913 or Pic rail for short, Picatinny rails were made to be a standardized version of the Weaver rails and can even be thought of as the Weaver Rail 2.0.

It is named after the Picatinny Arsenal  U.S. Army base in New Jersey, where it was invented in 1995, becoming the military standard (thus the MIL-STD-1913).

Some get the MIL-STD-1913 name confused, thinking 1913 refers to the year it was invented.

Believe it or not, the name actually refers to the military document stating the standard dimensions for the Picatinny rail system design.

And although it was invented to become the military standard, Picatinny rails quickly grew MORE POPULAR than the Weaver rails and are made by manufacturers around the world.

What is Its Reputation in the Rail Industry?

Since Picatinny rails were made to fit many accessories other than scopes, the Picatinny rail style base has become perhaps one of the most popular and well-known scope mounting systems in the world.

It is especially known as the Tried and True accessory rail system used on AR-15s and other rifles.

Most guns and mounts are made with the Picatinny-style scope mount and mounting system in mind, making them compatible with semi-automatic pistol frames.

Their utilitarian qualities have led them to be used even in paintball and airsoft guns.

They’ve also become THE STANDARD in many official sporting competitions.

You can find the main difference between Picatinny and Weaver rails in their recoil groove width and spacing.

One notable difference between the Picatinny and Weaver rails is that the Picatinny accessory rail will have square-shaped recoil grooves with a set depth for the slots at 0.118 inches (3.00 mm).

This would be best for newer users or those looking for a rail system compatible with many Picatinny accessories.

The advantages of a Picatinny rail mounting system and mounting platform easily outweigh its disadvantages but might be more than what one may need on an average hunting trip.

Moreover, the difference in weight is a matter of price difference— if you’re willing to spend a few more bucks, there are Picatinny rails available that are both lightweight and durable.

Picatinny and Weaver: New vs. Old

For the average firearms owner, choosing between a Picatinny rail or a Weaver rail will really come down to a matter of PREFERENCE.

The Picatinny design came years after the original Weaver, so it’s no surprise that the Picatinny would easily win it over in competition.

It’s a matter of preference in terms of these two criteria:

Many grew up using guns with the Weaver rail system and would prefer to use it over the Picatinny rails.

It certainly has a loyal following that has that sense of nostalgia, the same way a photographer might like to use old film cameras over newer models on some occasions.

What’s more, those used to the older design will already be adept at using it and may have difficulty learning how to use newer systems.

However, with Weaver Optics no longer producing their scope rifles, it will become MORE DIFFICULT to maintain their older scope rifle.

The growing popularity of the Picatinny rail beyond the military has also placed it at the top when it comes to rails. Constant innovations and improvements are commensurate to its increasing demand.

Picatinny rails are both the military standard and are a great investment for people looking to mount various Picatinny accessories like scope anti cant devices.

Moreover, the Picatinny rail is much easier to use for beginners that don’t already have experience with another rail style.

The Picatinny rail not only has various compatible accessories available on the market, but its ease of use makes it much simpler to switch them out.

What Are Rail Systems?

Although an accessory rail is pretty much a given these days, the idea of rails did not exist back then.

Before the invention of rails, accessories and scopes would actually have to be fixed directly on top of your firearms.

It eventually became too much of a hassle— having to hire a gunsmith to fix scopes on your firearm cost TOO MUCH MONEY and wasted TOO MUCH TIME.

Weaver Co., a mounting optics company known for its affordable and high-quality scopes, was founded in 1930 by William Weaver.

In the 1970s, Weaver made his company a heavy contender in the market by inventing the Weaver rail mount— which brought scopes and scope mounts for rifles to the mainstream market.

Most military personnel loved the Weaver rails due to these reasons: of

Weaver rails and rifle scopes quickly became popular and a mainstay for the firearm market and hunting community. In fact, it was often used for M14/M1A scope mounts!

However, the Weaver rail design did have its faults and flaws, eventually leading to the invention of the Picatinny rail.

Can I Use Weaver Rings on a Picatinny Rail?

To answer your question, YES, you can!

Because the MIL-STD-1913 mount has bigger Picatinny slots than the Weaver rails, all Weaver rings and accessories will actually fit nicely on top of Picatinny rails.

But since Weaver rails are built with rounded grooves that are SMALLER than those on the Picatinny rails.

Weaver accessories can fit on top of a Picatinny rail system that doesn’t go both ways.

A Picatinny ring is meant to go on top of a Picatinny mount, but depending on the Weaver rail base, a Picatinny accessory or ring MAY FIT in a Weaver-style mount.

So even if you do already have older and differently styled scope rings, accessories, or telescopic sights, it might not be a bad idea to upgrade to a Picatinny rail.

To learn more, check out this guide on how to measure scope ring height!

What to Choose Between Weaver and Picatinny Rail

We can see Weaver rails becoming obsolete in the near future because more and more manufacturers are using the Picatinny rail.

To be honest, it’s quite a feat that the Weaver rail is still being used and talked about — mostly thanks to its loyal followers, which is really a testament to their quality.

Use a Weaver Rail If…

Use a Picatinny Rail If…

In the end, it will all depend on your skill level and which rail mount system would match your needs best.

If you’re looking into different accessories for your firearm, it’s important to know about both mounting systems and their differences.

It’d best to explore the different types of scope mounts and accessories that you’ll be needing before you even start hunting. That way, you’ll be all set for your outing.