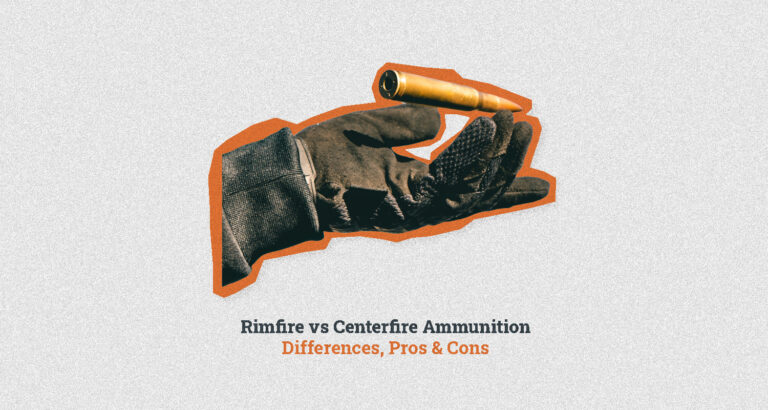 Not all ammunition is built the same.

Some ammunition will be more powerful than others. Some guns will shoot just fine with some ammunition but will get destroyed with others.

Specifically, there are two main types of ammunition: Centerfire and Rimfire.

Using the wrong type of ammunition for a certain gun or purpose can be disastrous.

So, what’s the difference between these two types?

How Does Ammunition Work?

Before comparing centerfire vs. rimfire ammunition, we need to look at how ammunition works in a firearm. 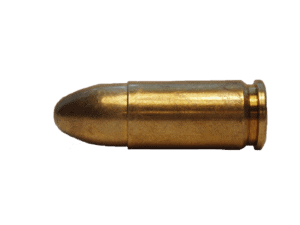 You probably think that this is a bullet.

We are sorry to tell you, but you think wrong.

What you are looking at is actually called a cartridge.

An ammunition cartridge, also known as a round, is pre-assembled firearm ammunition used for shooting.

Contrary to what you may think, the entire cartridge isn’t just one solid projectile that flies out of the gun.

A standard cartridge is composed of 4 parts:

So how is a cartridge fired from a gun?

When you pull the trigger on your firearm, you release the firing pin. Once released, the firing pin strikes the primer, which then ignites the gunpowder.

The burning powder then produces a gas that expands rapidly in the cartridge. This rapidly expanding gas is what forces the bullet out of the barrel of the gun.

Through this mechanism, the gun hits its target.

The primer is located differently between certain cartridges.

This is where the difference between centerfire and rimfire ammunition comes into play.

What Is Rimfire Ammunition?

In rimfire ammunition, the primer is located within the rim of the cartridge base.

To manufacture rimfire ammunition, the primer compound is spread uniformly along the inside of the case rim.

Once the primer is put in place, a smokeless or black powder is added before finishing it off with the bullet.

Rimfire rounds can be physically identified by a flat bottom.

Once fired, a rimfire cartridge has a pinched rim.

Why Use Rimfire Ammunition?

Rimfire cartridges are best used for low-pressure loads. This makes them a great choice for hunting small game or varmint.

A rimfire cartridge is also great for casual sport shooting and plinking — just pair them with the right rimfire scope, of course.

In addition to this, rimfire ammo is typically lighter and cheaper. This makes it easier to buy and store more of it at one time.

Thus, they are more ideal for training beginners.

Beginners are likely to use up a lot of bullets at one time while learning how to shoot properly.

Rimfire ammo allows them to practice as much as they need to without breaking their wallet or back.

What Is Centerfire Ammunition?

For centerfire ammo, the primer compound is kept inside a metal disk.

The primer is located in a cavity in the base of the cartridge and is held in place by friction.

There are two main types of centerfire primers:

Regardless of what type of primer you choose to use, you can be assured of a more even burn.

This is because the ignition comes from the center of the ammo.

A centerfire cartridge can be physically identified by the round disk at its bottom.

After firing, you will find that the centerfire cartridge has a little dimple in the center.

Why Use Centerfire Ammunition?

Because of this, they can handle higher pressures.

This means that centerfire ammo is compatible with larger calibers and is ideal for home defense and hunting.

What is the primary difference between rimfire and centerfire ammunition?

The difference is really in how the priming compound is applied to the cartridge.

Rimfire ammunition has the priming compound within the cartridge.

On the other hand, centerfire ammunition has it outside the cartridge.

Other than that, what are the differences between these two types of ammunition?

Rimfire ammo is much more cost-effective to manufacture than centerfire ammunition.

This is highly due to its simple design consisting of thin walls with a flat bottom.

On the other hand, centerfire cartridge cases require more material and are more expensive to manufacture.

Because of this, rimfire ammo costs about 1/10th the cost of centerfire ammo per round.

Rimfire cartridges are very lightweight due to the thin walls needed to let the firing pin strike the priming compound.

This makes it more susceptible to external factors that can reduce the shot’s accuracy.

A centerfire round, on the other hand, has more weight. This means that it is less likely to bow to the elements.

More time in flight means more chances for the bullet to be swayed.

As such, rimfire cartridges are best used for short-distance shooting.

The scopes made for such cartridges reflect this usage too.

On the other hand, centerfire scopes are usually adjusted to around 100 yards/meter.

Small caliber ammunition has a higher chance of malfunction due to the manufacturing process.

Any reliability issues are most likely to occur when the primer is attached to the base of the cartridge.

Thanks to the amount of primer compound in centerfire ammunition, however, finding a dud centerfire cartridge is rare.

This makes it so much more reliable, especially in emergencies or high-stakes situations.

Because rimfire ammo is so small, it is only available in small calibers from .17 to .22 caliber.

This greatly limits the firearms and shooting you can use with rimfire ammunition.

On the other hand, centerfire cartridges are available in more calibers, ranging from anywhere between .22 caliber to .50 BMG.

If you’re a beginner shooter, rimfire ammunition is the way to go.

As rimfire cartridges are lightweight with lower pressure, they have almost zero recoil.

This makes it an ideal choice for beginners, especially children, who are not used to recoil.

In addition to that, rimfire rounds are a lot cheaper than centerfire rounds.

This makes it ideal for beginners who need to shoot many rounds to get their shooting perfect.

And, thanks to the smokeless powder that rimfire ammunition usually has, rimfire ammo is great for new shooters who are not used to fumes.

If you’re looking to get rid of varmint or hunt small game up to the size of a groundhog, rimfire ammo is the way to go.

A rimfire cartridge is small and light enough to take out small game.

However, the thin cartridge walls and low pressure of rimfire ammo won’t be able to pierce the tough skin of bigger game.

If you prefer big game hunting, it is recommended to use centerfire cartridges instead.

Centerfire ammo has the bullet speed, pressure, and tougher walls needed to break through the skin for big game hunting.

This makes a centerfire round ideal for self-defense as well.

However, it is recommended not to use centerfire ammo for small game and varmint.

With the firepower and pressure of a centerfire cartridge, it’s highly unlikely that there will be anything left of the varmint after.

We understand that varmint is a nuisance. However, practically blowing them up with centerfire ammo seems like overkill.

This is especially bad for small game hunting, as you won’t have anything left to take back after.

Is My Gun Rimfire or Centerfire? How Do I Know?

Be sure that you fire your gun only with the proper cartridge.

Failing to use the right cartridge can result in weapons failure, injury, and even death.

The easiest way to figure out what cartridge your gun is meant for is by looking at the base of the cartridges it shoots.

Does it have a circular primer in the middle? If so, your gun is better suited for centerfire cartridges.

Does the base have hollow, pinched edges after firing? If so, your gun or rifle is meant for rimfire cartridges.

Some other guns have the specified cartridge name stamped on them to eliminate any guessing games.

What Cartridges Are Centerfire?

Confused as to what cartridges can be counted as centerfire cartridges?

Here are a few:

It may be helpful to remember that centerfire rounds usually have more power. Thus, they are used more often for rifles and high-power firearms.

Centerfire rifles are often used for hunting and long-range situations.

If you use your rifle for the above purposes, it likely uses centerfire rounds.

That being said, it isn’t impossible to find a centerfire handgun that offers more power than a rimfire one.

What Cartridges Are Rimfire?

Unsure of what cartridges can be classified as a rimfire round?

Here are some of the most common rimfire ammo cartridges available on the market:

It may be helpful to note that rimfire firearms have less shooting power.

Thus, they tend to come in smaller calibers.

Final Verdict: Which Is Better — Rimfire or Centerfire Ammo?

In this article, we have compared rimfire and centerfire cartridges.

The main difference between these two different rounds is really the way that the firing pin strikes the primer ignition systems:

So now comes the age-old question: Which is the better ammunition?

It all depends on what you’re planning to use it for.

Are you planning to use your gun for hunting or self-defense? If so, you’d be better off with centerfire ammunition.

Are you a beginner? Are you planning to teach your child how to shoot? If so, it is best to use rimfire ammunition.

Are you looking for a firearm for self-defense? If so, centerfire ammunition has the power to protect you.

Do you want to spend a long time out at the range without having to worry about denting your account or suffering from too much recoil?

If so, rimfire ammunition is an ideal choice. However, if you are out and want to shoot at longer ranges, you should bust out the centerfire ammo.