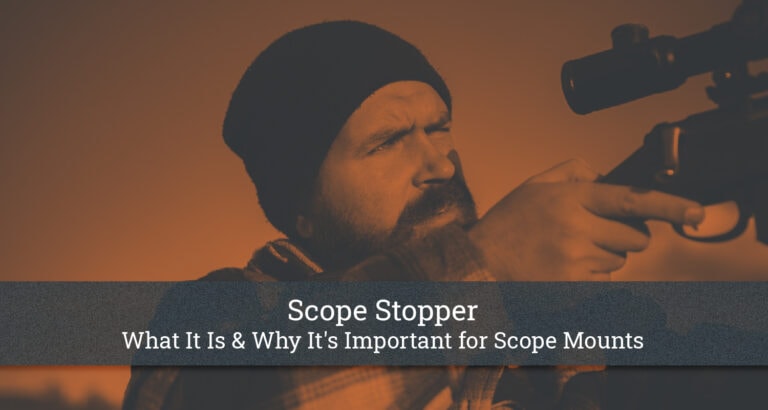 Air rifles are very popular among shooting enthusiasts because they’re safer than live firearms, easier to acquire, and are allowed in places wherein real firearms are unable to be used.

Air rifles also have different configurations and laws governing them, such as the importance of scope stoppers in their system.

They come with their own set of problems, and that’s exactly what we’re going to tackle in this article.

What Are Scope Stoppers and Why Are They Important?

When you fire a gun, there will inevitably be some vibration and recoil due to the bullet leaving the chamber.

This not only shocks the shooter but also tends to move the scope around even if you tighten its screws.

This movement can also cause the mounting to go loose with every shot.

The movement of the scope and the loosening of the screws then CAUSE DAMAGE to the rifle by creating little holes, cracks, and scratches. This phenomenon is called rifle scope creep.

While rifle scope creep is an issue faced by all rifles, it is most common in air rifles due to their use of compressed air.

SIDE NOTE: It is less common in low recoil air rifles such as a PCP/CO2-powered gun or a low power springer as the recoil isn’t enough to cause real damage.

Riflescope creep won’t just go away if you tighten the screws. In fact, tightening the screws TOO MUCH might damage the rifle further.

Scope stoppers are a means to stop this problem. They work by keeping the scope in place to minimize scope movement with every shot.

One way to stop the problem of rifle scope creep is by buying a stopper system that you can easily add to your air rifles.

While there are multiple types of stopper systems, there are three which are the most prominent:

This is one of the most common systems due to its compatibility with both the one-piece mount and the two-piece mount.

It works by fitting into the vertical holes found on top of the spring tube on certain models. Once the mount is clamped on, it prevents the scope mounts from moving with the shots.

This scope-stopping system allows the user to mount a Weaver-style ring onto an air rifle without a weaver base.

It has a vertical scope stop pin built into the rear mount, which helps prevent scope movement when fired.

Unlike the above systems, which have to be added manually to the gun, this system already comes pre-attached to some rifle models upon purchase.

The scope stop plate is usually located at the rear of dovetail mounts. It has the advantage of not requiring vertical holes in the spring tube as the other two systems do.

When using a rifle with a scope stop plate, simply mount the scope against the given plate to lock it down in place.

How Can You Stop Rifle Scope Creep?

While quick and direct, the stopper systems above are not the only ways to stop rifle scope creep.

There are other ways to stop rifle scope creep that don’t involve stopper systems.

One way to stop rifle scope creep is by attaching a rail to the top of the air rifle. The scope mount is attached to the ridges of the rail, thus stopping it from moving and lowering the chances of scope creep.

The two most popular mounting systems are the Picatinny and the Weaver rail. While these two make look similar, there are some key differences between them.

For starters, Picatinny rails have more and wider ridges. As such, something that mounts on a Weaver can mount on a Picatinny, but it doesn’t necessarily work vice versa.

Another type of rail that’s very popular, especially for air rifles, is the dovetail. However, these kinds of mounting systems don’t contain any ridges that could stop the movement of the scope mount when shots are fired.

In such a case, if you have a dovetail or similar rail, you need a scope stop pin or another means to stop creep.

If the manufacturer’s finish on the scope ring is too smooth for a proper grip, you may opt to lap the rings yourself.

This method increases the surface area between the scope and rings by applying an abrasive substance between them.

This substance creates friction between the scope and the scope rings, allowing them to stick together. It also helps get rid of any rough patches on the surface.

You can easily purchase lapping kits from the rifle manufacturer to ensure that the materials used are suitable for the model you have.

3. Tape the Inside of the Scope Rings

You can try lining the inner part of the scope rings with a cloth or gauze tape to create an abrasive surface that helps reduce rifle scope creep.

It will melt and cause rifle scope creep and damage to the scope and rifle. A sticky, damaged rifle is not what we intend to make here.

You can place a thin sheet between the scope and scope ring to allow for additional elevation and to fill any space that the riflescope can move around in.

This process is called shimming and usually utilizes aluminum sheets and cardboard to elevate the scope and stop rifle scope creep.

HOWEVER, if you use this method, make it a point to use only two sheets at most, or else the scope won’t shoot well.

Another popular way to deal with scope creep is by using adhesives such as Loctite to secure your scopes.

Products like Loctite have different colors for different product strengths.

For example, RED signifies maximum strength while BLUE has medium strength, so you can make the necessary adjustments needed for how serious you want to be.

Another low-cost solution, especially for the ladies, is nail polish.

Just put a drop of nail polish onto the lower ring before mounting the scope tube. The dried polish will secure it and stop it from moving. However, it is still easily removable, should the need ever arise.

We do NOT recommend using super glue, as it can damage the barrel to the point that it won’t shoot properly.

Be careful when choosing an adhesive and ensure it won’t damage your rifle. To be sure, make it a point to always consult with the rifle manufacturers first. This is YOUR responsibility as a customer.

Rings can gain rust with age or just develop natural wear and tear over time.

In such a case, it’s better to get new scope rings instead of making unnecessary adjustments that won’t help if the problem lies within the rings themselves.

How to Properly Mount an Air Rifle Scope

Now that we know more about what scope stoppers are, it’s to time to discuss the proper way of mounting an air rifle scope to avoid any mounting issues:

For best results, be sure that you sight your scope with the right type of pellets. Different pellets work differently with different guns that have different barrels.

If you do this with the wrong type of pellets, you may not be able to hit your target accurately when out on the field.

Riflescope creep is a serious problem experienced by all rifles but is most prominent in air rifles.

You have to be very careful when purchasing air guns. It isn’t uncommon for a decent air gun to come with a bad scope or mount, which would need extra adjustments.

As quality tends to vary from model to model and from gun to gun, be sure to check out what your air gun needs before you make a purchase.

And remember that as a customer, it is always best to consult first with the manufacturers before making any long-term adjustments to your air rifle.