Remington 700 ADL vs SPS: Which One is a Better Investment? 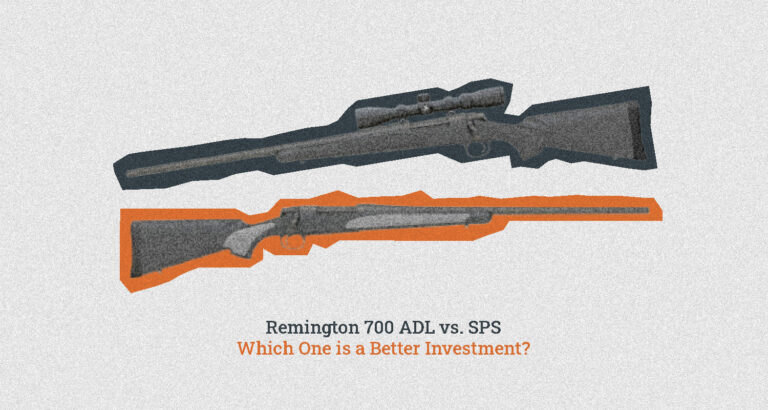 All experts and firearms enthusiasts agree that the Remington 700 is one of the most competent rifles ever introduced to the world.

Accurate, rugged, and dependable, the Remington rifle has spawned a lot of variants for militant as well as civilian use.

If you’re new to bolt action rifles, then you should know that there are 2 variants of the Remington 700 that you definitely need to check out: the ADL (Average Deluxe) and the SPS (Special Purpose Synthetic).

Wonder who would come out on top in a Remington 700 ADL vs. SPS competition? Keep reading this article!

Down below, I’ll cover everything you need to remember about the ADL and SPS variants of Remington 700. I’ve also included their features and overall performance to help you decide which is better for your personal preference.

Brief Overview of the Rifles

For a time, ADL was the most cost-effective variant in the line of Remington Model 700 but after the year 2005, Remington 700 SPS quickly took over that spot.

While Remington first decided to completely shelve the production of ADL, the variant’s made a comeback in recent years as a low-cost option for budget-minded shooters.

Compared to original units, new ADL rifles have received some changes here and there though the design is still the same.

Similar to other variants of Remington 700, ADL rifles are available in several configurations. Namely, you can choose from 10 different models with:

Thanks to the wide selection and affordable costs, ADL rifles are well-liked by people on a budget. From what I’ve seen, ADL rifles are cheaper than their SPS cousins by a few hundred dollars as well.

Made to supplement and then replace ADL, the Remington 700 SPS model is a new design that features a new material, trigger, and magazine.

I’d say the overall performance of most ADL rifles is highly competitive. Nowadays, both ADL and SPS rifles are in production, but the average price of SPS models tends to be higher.

That being said, bolt action rifles in the SPS line still remain more or less reasonable compared to high-end Remington 700 rifles. As a result, shooters often go for SPS rifles if they want something with quality that’s still affordable.

With such a huge number of configurations, virtually any shooter can find a Remington 700 SPS that suits their demands. That kind of advantage makes SPS rifles excellent choices not just for novices, but also for veterans.

Notable Features of the Rifles

Simply put, ammunition goes in and out in the same manner when using a blind magazine. So you could only rack a round out of the rifle action one at a time.

For shooters that prioritize ease of use, this arrangement is less convenient to reload, especially if you’re wearing gloves. In addition to that, there is a chance that you might load the round too far forward or backward and that will result in an annoying jam.

I advise paying attention and staying concentrated while reloading a Remington 700 ADL rifle.

Smooth and stable, the laminated/synthetic stock of the Remington 700 ADL performs admirably in the great outdoors. Although its material isn’t top-tier, the stock would hold itself together for a long time on the field.

Regarding overall display, I think this rifle scores rather well using the factory stock, and that’s why there is no need to worry about accuracy drops.

If you want something tougher though, there are a lot of aftermarket stocks available for purchase nowadays. All you have to do is pick one that matches your rifle color.

While the X-Mark trigger is primarily designed to be adjusted by a gunsmith, shooters can also change the pull weight on their own, assuming that they know how to.

The factory setting of the trigger pull is 5 pounds which I understand can be a bit heavy to some people, so feel free to tweak it as you see fit.

Besides that, the rifle also features a plastic trigger guard that is somewhat functional but might not be able to survive significant concussions and rough uses. Fortunately, it’s not difficult to find and secure replacement trigger guards for Remington rifles.

Being a free-floated design, the barrel of ADL rifles possesses a superb shooting consistency compared to most classic models.

While the life of the barrel varies depending on the choice of caliber, it should at least serve you well for a few thousand rounds.

As the twist rate of the barrel largely decides the type of round that the rifle accepts, there are several limitations you have to remember.

All factory-manufactured ADL rifles have a stylish matte black finish covering the bolt as well as the bolt face. After a couple of discharges, the finish on my bolt face slowly disappeared, but that’s a negligible issue.

Generally speaking, the finish is rugged, and it should stay intact for years as long as you look after your rifle.

If possible, I recommend storing the rifle in a case to extend the longevity of the finish. Of course, in case the finish wears out earlier than you expected, just send the rifle back to Remington for re-finishing.

Similar to a blind magazine, a hinged magazine is also an internal design but with one distinct difference: Shooters can unload the rifle through the floorplate.

This means that you no longer have to cycle and eject individual rounds at the end of a shooting session or hunting trip. You simply pop open the floorplate in order to retrieve ammunition.

This feature is why I prefer hinged magazines to blind magazines when it comes to convenience. Though it’s not as handy as a detachable magazine, a hinged magazine is a great choice for how most bolt-action rifles work.

Instead of using wood as classic rifles do, the Remington 700 SPS employs a synthetic stock, so the weight is fairly light.

Moreover, the stock of SPS rifles features gray inserts on the rear and front sides of the stock, which result in excellent handling characteristics.

For hunters that often have to stalk their prey through dense vegetation, the stock’s ergonomic profile is a major plus.

Aside from factory stocks, shooters are able to purchase and outfit their Remington rifles with aftermarket options from Hogue and Magpul as well.

The trigger guarantees minimal creeps and delivers far more adjustment freedom compared to its predecessor. After leaving the factory, the default trigger pull is set at 3.5 pounds, and you have 2 pounds worth of adjustment available.

If you don’t have specific needs or requirements, I think a pull weight of around 3 pounds should be more than enough. With this setting, the risk of unintended discharge is fairly low, and the trigger remains light for quick firing.

In line with other Remington 700 variants, SPS rifles boast the iconic twin locking lugs in a rugged circular receiver ring.

Assisted by a semi-doglegged and flattened bolt knob, the operation of the bolt is straightforward and can handle tough conditions.

Additionally, the safety mechanism is still the good old lever that is located behind the bolt handle of the rifle with 2 settings: On and Off.

While other advanced rifles feature complex designs such as bolt/trigger locks, the venerable safety lever of Remington 700 SPS is still very much well-liked.

Equipped with a thick barrel, the Remington 700 SPS possesses a higher endurance than a lot of its cousins that only have thin sporting barrels.

Considering the fact that there are 6 holes on the fore-end of their barrels, SPS rifles fare quite well when it comes to repeated firings.

Normally, as the twist rate of the barrel decreases, you can use heavier and heavier bullets which improve hitting power.

In case you want to outfit the muzzle brake or the other parts, some barrels of SPS rifles come in threaded as well.

Optimal Accuracy of The Rifles

Although the precision of a particular firearm relies considerably on the skill of the shooter, the Remington 700 ADL is known for being a highly accurate rifle.

Regardless of the caliber, ADL rifles can achieve rather tight groupings with factory-manufactured ammunition.

At 100 yards and closer, I’ve found that the groupings typically stay below 1 inch. As the distance increases, your shooting skills will come into play.

An average shooter can land round after round on targets with relative ease out to 300 yards or so, though. A good shooter will be able to do even better.

Hunters that regularly shoot in the woods consider the precision of the SPS rifle to be quite sufficient in most cases. My shot groupings rarely exceed 1 inch if the range is around 75 yards, which is a common distance for visual confirmation.

When your surroundings consist mostly of dense branches and bushes, it’s unnecessary to bring a rifle specifically built for long-range shooting.

However, the rifle is able to use lightweight high-velocity rounds, too, so it can give respectable results at extended distances if needed.

Compatible Scopes for The Rifles

Nowadays, people either purchase an ADL rifle or pay a bit extra to get a scope to use with the rifles. In my experience, the scope that accompanies the rifle is kind of mediocre, so it’s best to only get the rifle.

Once you manage to secure the rifle, you can start thinking about the type of scope that will match your taste. For a Model 700, I’d recommend a ProStaff (Nikon), DiamondBack (Vortex Optics), or Rifleman (Leupold).

It goes without saying that you need to take your shooting purpose into account as well before deciding on a rifle scope, though.

Thanks to the Picatinny rail, I found mounting and securing a scope to my SPS rifle to be a breeze.

In terms of suitable models, there are a variety of options on the market, such as brands like CrossOver (LUCID), Buckmaster (Nikon), and Dusk and Dawn (Bushnell).

Since this rifle has a fairly forgiving rail, I was able to swap the current scope for another without much difficulty.

But needless to say, whatever rifle scope you choose, take the lens diameter into consideration and always use appropriate mounting rings.

Models in the Remington 700 line, including the ADL and SPS, have received praises from many shooters around the globe.

They’ve even received praise for their bullets too, such as the 30-06 Springfield!

Nonetheless, at the end of the day, I know that people have their own conflicting ideas about the best rifle overall, especially when it comes to the Remington 700 ADL and SPS.

So the only way for you to determine the winner in the competition is to discern based on your personal preference and style.

Crosscheck the things you like or hate with the characteristics of these rifles, and you should be able to conclude what rifle to get here.

Check out my guide on the best .300 win mag rifles for more rifle reviews!

Quick Reminder: There are various methods for shooters to secure quality Remington rifles, but if possible, play it safe and order straight from the brand. That allows you to access the post-purchase support from Remington and avoid other issues.